During the war, a soldier was tortured by the enemy because had had a government issued cell phone.

He returns to the USA, severely disfigured and breaks out of a hospital, disappearing. He starts a cult of “Anti-Technology” followers who are marked by bar-code tattoos (these cult members seem to be everywhere, teachers, law enforcement and so on.)

In the end, he kills everyone who didn’t forward the letter, including a cop who insisted that the letter be forwarded to him for evidence. 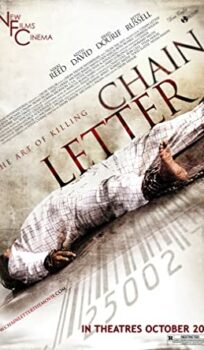