POOPER
Charlie Chaplin leaves the United States because of his alleged ties to Communism and lives the rest of his life in exile in Switzerland.  He returns to receive an honorary Oscar in 1972.

LONG VERSION
Told in flashbacks while writing his autobiography, Charles “Charlie” Chaplin (Robert Downey, Jr.) tells the story of his career to George Hayden (Anthony Hopkins), the book’s ghostwriter.  Charlie first appeared on stage at age 5.  Because his single mother was unable to take care of him and his older brother Sydney, they are taken by the police and sent to a labor house in his hometown of London.  Their mother later goes crazy and is sent to a mental institution.  Years later, a now-teenage Charlie is out of the labor house and, thanks to Sydney, who is acting as his agent, is able to get jobs working as a physical comedian on the London stage.  While there, he meets his first love Hetty Kelly (Moira Kelly).  They fall in love but she refuses to marry him.

Years later, Charlie gets an invitation to come to America to work with Hollywood producer/director Mack Sennett (Dan Aykroyd).  Once there, he soon develops his signature character, The Little Tramp.  The Little Tramp movies are a hit, and Charlie becomes a huge star in Hollywood. With his new-found star power, Charlie quits working with Sennett and begins his own production company.  While Charlie is making one hit movie after another, he is also constantly falling in love and marrying his leading ladies.  All of his marriages produce several children, and all of them end in divorce due to either Charlie’s obsession with his movies or his wandering eye.  Charlie also has several affairs with other women, one of which results in a paternity suit.  Even though blood tests prove he is not the father of the child, the court rules against him and he must pay child support until that child’s 21st birthday.

While attending a dinner party hosted by his best friend Douglas Fairbanks (Kevin Kline), Charlie gets into an argument with a fellow guest, FBI agent J. Edgar Hoover (Kevin Dunn).  This begins Hoover’s quest to destroy Chaplin.  Chaplin eventually learns of Hoover’s investigation, but doesn’t take it seriously.  Meanwhile, Charlie is getting pressure to turn his Little Tramp movies, which are all silent, into “talkies”.  He refuses, claiming that making the Little Tramp talk will ruin the character.  He finally makes a talkie with The Little Tramp in “The Great Dictator”, which Charlie uses as an attack on Hitler and the Nazis and reveals his true political beliefs.  Hoover, now the head of the FBI, sees the film as an attack on America and turns up the heat on the investigation.  At this time, the rumors of Chaplin’s involvement with Communism are growing, but they are unfounded.

Following yet another divorce, Charlie meets and eventually marries Oona O’Neill (Moira Kelly again), who is a dead-ringer for his first love Hetty Kelly.  While they are vacationing in London, Hoover learns that Chaplin’s first wife (Milla Jovovich) was underage at the time she got pregnant with his child.  Combining that with his alleged Communist ties, Hoover refuses to allow Chaplin back into the USA.  Even though he could have filed an appeal, Charlie and Oona choose to move to Switzerland and live in exile, where they ultimately stayed for the rest of their lives.

Many years later, with his political beliefs forgotten, Americans have become interested in Chaplin’s movies again.  In 1972, and in ill health, Charlie returns to America and is presented with an honorary Academy Award.  The movie ends with a montage of clips from actual Charlie Chaplin movies. 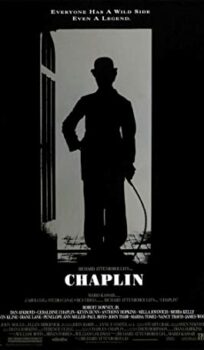