Charlie (Anton Yelchin) gets the idea to become the unofficial school psychiatrist by getting prescriptions for students through other psychiatrists he sees taking on the students symptoms. During the process, he becomes the go-to guy for everything at his school. Eventually, he stops getting the drugs after a kid tries to kill himself with pills Charlie got for him. Charlie tells people if they still want to come to him with problems, he will listen, which makes him even bigger. He is now the person everyone looks to for their answers.

During the ordeal, the school board makes the Principal Gardner (Robert Downey, Jr.), who is the father of Susan (Kat Dennings), whom Charlie is seeing, put cameras in the student lounge. This causes a protest, which later becomes a riot when Charlie is taken into custody for punching the principal earlier. The principal gets fired.

Charlie goes to Principal Gardner to talk only to find him drunk with a gun. He is pissed at Charlie for turning the students against him. Charlie wants to help, but admits he is only a kid. Gardner raises the gun and Charlie jumps for him thinking he is about to kill himself. Charlie ends up knocking himself into the pool. Gardner saves Charlie and tells him he wasn’t going to kill himself as he “has too many responsibilities”. Charlie and Gardner go to the school play written by the suicidal student from earlier. Susan sings and exchanges looks with her dad, showing they will be on good terms again.

In the end, Gardner goes back to being a history teacher. Charlie is last seen interviewing for an internship at a psychiatric institute. The interviewer says he is having a bad day and in Charlie, in his style, asks the interviewer, “Would you like to talk about it?” 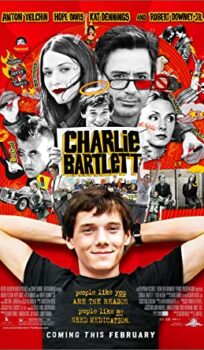