Charly Gordon (Cliff Robertson) is a retarded adult with an IQ of 70 who goes to night school because he wants to learn.  His teacher takes Charly to a clinic where he is observed by doctors who are doing experiments on increasing intelligence levels.  They had been doing the experiments on mice, and are now ready to try it on a human.  They need to perform brain surgery on Charly, and he agrees to do it.  As a result of the surgery, Charly gradually becomes smarter, and eventually a genius.

But before they are ready to go public with their findings, the scientists discover that the mice who were experimented on earlier are regressing back to pre-surgery intelligence levels.  Tests determine that the increase in intelligence from the brain surgery is only temporary, and this will also happen to Charly.  The scientists also learn that performing another surgery will not prevent the regression.

By the end of the movie, Charly has forgotten everything he has learned and is once again retarded. 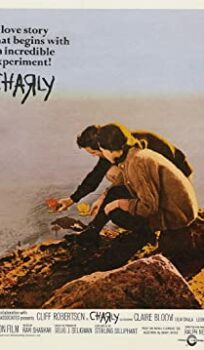