POOPER
Mickey and Roger make it to the final game of the season, where Roberto Clemente hits a double for his 3000th career hit.  In the present day, Roger is still alive and he gives Mickey back his old book about Clemente.

LONG VERSION
Based on a true story, Mickey Straka (Ray Liotta) is driving his two kids to Pittsburgh so they can attend a Pirates game, and it’s Roberto Clemente Day.  Mickey was a huge Clemente fan, and as they drive to the game, Mickey tells his kids about the time he and his brother Roger wanted to see him get his 3000th career hit.  Now told in flashbacks, we see young Mickey (Trevor Morgan), a star on his Pittsburgh area high school baseball team, being cheered on by Roger (Rory Culkin), who has muscular dystrophy.  In 1972, because of Roger’s declining health, their mother Marilyn (Lauren Holly) decides to move the family to Los Angeles.  Now in LA, Mickey is struggling on his new high school team, and the fact that his mom is spending all her time taking care of Roger and ignoring him is clearly bothering him.  He even asks her if she knows that she has two sons.  As Marilyn is preparing to leave for a few days, they get a call from her father Poppy (Seymour Cassel).  He tells Mickey that Clemente got his 2997th hit that night, and he wonders if he’ll reach 3000 this season, even though there are only 4 games left.  He also asks if they will be able to see it in Los Angeles.  Before she leaves, Marilyn takes Roger to the hospital for a checkup, and she asks the doctor why his health is not improving.  He says (with Roger overhearing) that it’s great that he has made it to age 14, because hardly any make it to graduation.

The next night, Mickey tells Roger that he’s going back to Pittsburgh to see Clemente get his 3000th hit.  With their mom in San Francisco, he will take her car on the 2458 mile drive, see the hit, then drive back.  Roger decides to come with.  Once Marilyn leaves in the morning, they pack up the car and head out.  That night, Marilyn gets a call from the doctor, who tells her that Roger has bronchitis, and she doesn’t have the correct medicine for him.  Marilyn then calls to have Mickey pick up the new prescription, but when he doesn’t answer, she takes the first flight back to LA.  On the road, Roger realizes he left his medicine at the last rest stop, and he is starting to cough.  They go to a hospital in Albuquerque to get more medicine, but they won’t give it to him without parental consent.  Mickey is able to get the medicine away from the nurses, give it to Roger, and they sneak out and get back on the road.  The next morning, Marilyn has returned to an empty house and her car missing, so she reports it stolen.  At a diner, Mickey and Roger read the newspaper and learn that Clemente got another hit, and is now only 2 away from 3000.  They are now hoping he doesn’t get another hit until they reach Pittsburgh in two days.

As they are paying the check, the police arrive and find the car.  As Mickey are Roger are trying to avoid the cops, the cook snatches them up, places them in the trunk of his car, and drives them to his home in southern Oklahoma.  He wants a reward for the obvious runaways, but Mickey tells him that they aren’t runaways, and he is now a kidnapper.  But he and Roger will pretend this never happened if the cook drives them to the local train station, which he does.  Back in LA, Marilyn calls Poppy and tells him what has happened.  The police found the car near Oklahoma City, but not the boys, and she has figured out that they are going to Pittsburgh.  She knows that they’ll find a way to get there without a car, and she is flying out to meet them once they arrive.  At the train station, Roger realizes that he left his wallet in the car, along with his wheelchair and medicine.  With no money to buy tickets to Pittsburgh, he convinces Mickey to hop on a passing freight train, which will take them to St. Louis, then they’ll figure it out from there.  They make it onto the train, only to find out they are not alone in the train car.  Kelly (Tania Raymonde) is also in the car, and she is a runaway.  She left home three years ago because her stepfather kept hitting her and her drug-abusing mother did nothing about it.  As they are traveling, Roger picks up a book that Mickey always carries, the biography of Roberto Clemente, and begins to read it.

The next night, Kelly has decided it’s time to get off of the train.  She takes Mickey’s Pirates cap before she jumps off and disappears into the night.  Mickey and Roger also get off, only to discover they aren’t in St. Louis, but in Birmingham, Alabama.  They wander the streets until they arrive at a mission.  There, Mickey calls Poppy, and Marilyn answers and begins yelling at him, so he hangs up on her.  Roger then calls, and he tells Poppy where they are.  With Mickey on the phone again, Poppy tells him that their mother is on her way there to pick them up at the Birmingham train station.  Mickey then tells Roger that their mom is on her way to get them, and the trip is over.  He also says he shouldn’t have taken him on this trip, but Roger says that he needed this as well.  He knows that his time is nearly up, and just like the aging Roberto Clemente, he only has a few chances left to do something special.  So they decide they will figure out a way to get to Pittsburgh.  They then hear on the radio that Clemente got another hit that night in a game in Philadelphia, so he is now only one hit away from 3000.  Fortunately for them, Clemente took himself out of that game and said he won’t play again until the team returns to Pittsburgh, so he can get the hit in front of their fans.

Several hours later, Marilyn has arrived at the train station, where she meets Kelly, still wearing the Pirates cap.  Marilyn recognizes it as Mickey’s cap, and she asks Kelly if she saw two boys, one of whom is in a wheelchair.  She tells her that she saw her sons earlier on a freight train, but she hasn’t seen them since she got off, and they are probably long gone by now.  Marilyn then leaves and begins to drive back to Pittsburgh.  As for the boys, they are actually walking down the highway, where they meet up with a motorcycle gang, who gives them a lift to the Tennessee border.  Once there, they find a barn to sleep in, but are woken up in the morning by the farmer who lives there, Chuck Ireland (M. Emmet Walsh).  It turns out that Chuck is also a Clemente fan, and he gives Mickey and Roger his car so they can drive the 10 hours from Tennessee to Pittsburgh.  By the time they reach Ohio, Roger’s health is beginning to get worse.  With less than 40 miles to go, Roger is having trouble breathing, so Mickey takes him to a hospital in Steubenville.  He will recover, but the doctor tells Mickey that he may not survive another episode.  Later, Roger convinces Mickey to go to the game by himself to see the 3000th hit, then he can return and tell him all about it, but Mickey refuses.  They came all this way to see it together, and that’s what they will do.  Roger is released from the hospital, and he, Mickey, and a just arrived Poppy travel to Pittsburgh to see the final game of the 1972 season.  In that game, Roberto Clemente hit a double to become the 11th player in MLB history to have 3000 career hits.  After the game, as they are leaving the stadium, they meet their mother waiting by the gate.  Marilyn hugs Mickey and tells him that he means as much to her as anyone else.

Back in the present day, Mickey and his kids have arrived in Pittsburgh, and they are walking across the Roberto Clemente Bridge to get to the stadium.  As they are crossing, they meet Roger (Jay Karnes), still very much alive and in his wheelchair.  As the kids are getting the tickets, Roger gives Mickey his old Clemente biography back to him and they enter the stadium.  As the movie ends, title cards read that Roberto Clemente ended his career with exactly 3000 hits.  He died in a plane crash on New Years Eve, and the next year he was elected to the Baseball Hall of Fame. 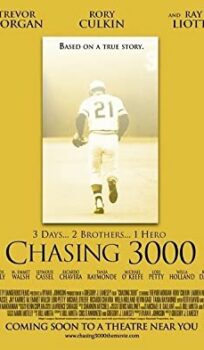