During the course of Phil’s (Jeff Venables), Chuck’s (Josh Beren), and Yanni’s (Jeff Sloniker) 30-day stint with the magic shirt, Chuck brings two girls over to his and Yanni’s apartment while Yanni and Phil are there, and while he has sex with one of them, the other gets to talking with Yanni, and they develop a connection over having had pet turtles when they were kids. Unfortunately, their bonding is brought to a halt soon after when Chuck throws her out of the apartment after explaining that he won’t have time to do the deed with her, since he is going to be a while with the girl he is currently screwing and he has an impending appointment with another woman. When Yanni objects to this, Chuck responds by threatening to revoke his shirt privileges.

Sometime later, as Chuck is chatting with Phil, he gets a call from Coughlin (Ryan R. Williams) – a mentally disturbed fellow military veteran who is slowly dying from sarin gas poisoning – and he tells Coughlin all about the shirt and the sex it has given him and promises to show him how it works later on. Phil is not happy with this idea and lets Chuck know about it, but Chuck essentially tells him to just mind his own business. However, as Chuck is hanging out with Coughlin that night and lets him get some action with the shirt, Coughlin soon runs off with it and has some wild sexual adventures around town. With Phil’s help, Chuck tracks down Coughlin to his apartment and steals the shirt back while he sleeps, and after Coughlin wakes up later on and finds that the shirt is gone, he brands Chuck and Phil as enemies.

Phil borrows the shirt the next day intending to use it on Jen (Meili Cady) while she is visiting her friend Ashley (Kristi Engelmann) at her condominium, but as he is walking down the hall on the way to it, he runs into Ashley first and accidentally bewitches her until he manages to remove the shirt and stop her. Shortly afterwards, Ashley’s visiting drug dealer Prof. Con (Jermaine Joseph) – having overheard the incident as well as Phil trying to explain to Ashley that the shirt is magical – snatches the shirt and runs away. After getting Prof. Con’s number from Ashley, Phil tracks him down to a house in Compton and manages to get the shirt back despite great risk to his well-being. When he returns to Chuck’s and Yanni’s apartment, Chuck chides him for not having the shirt back when he was supposed to (he never tells Chuck or Yanni about what he just went through) and insults him for trying to win back a woman who doesn’t love him. Phil fires back at Chuck by telling him that he is no American hero, but a creep, and that there is more to sex than just a shirt and that maybe he ought to try eye contact with the person he is having sex with and practice a little love and human understanding. He then leaves, and after Yanni tells Chuck that he’s something worse than a creep, Chuck goes for a walk to clear his head. After some thought, he realizes that he really does need to find real love and the shirt can’t give him that.

The next day, Coughlin decides to steal the shirt and ensure that it remains his. That night, Phil stands under Jen’s apartment window and attempts to serenade her with a song while wearing the shirt, but he notices that it isn’t working on her and she ends up tearfully turning him away. As he starts to walk home, Coughlin attacks him from behind and dazes him, then pulls the shirt off him and flees. Phil then pays the man known as “Shirt Guy” (Rolando Millet) (the shirt’s owner who loaned it out to Phil and his friends just to take a vacation from the non-stop sex) a visit at the park, and he tells him that he used the shirt around Jen and she didn’t fall under its spell. Shirt Guy gets excited after hearing this and congratulates Phil because the shirt doesn’t work on your soul mate, so that is clearly what Jen is. Chuck then appears a short time later, and Phil tells him that Coughlin took the shirt and that they must get it back from him once and for all and then return it to Shirt Guy. However, this will all have to wait until after he does a job interview with a website company tomorrow morning, having finally decided to find employment for the sake of his and Jen’s relationship. The next morning, he passes the interview and gets hired, and around the same time, Jen is out on a hike with Brad (Zach Brooks), a guy she met a few days earlier, and she tells him that she isn’t ready to date again because she realizes that she still loves Phil. Brad reveals that he is actually gay, so that poses no problem.

Phil is then shown out driving with Chuck and Yanni, who plan to take Phil on a “guys night out” to celebrate him landing the job and forget about the shirt for the time being. However, Phil gets a call from Coughlin out of the blue, who tells him that he knows where Jen works and lives and that he plans to use the shirt on her tonight. After Coughlin hangs up, Phil tells Chuck and Yanni to look for Jen at her workplace while he makes a beeline towards her apartment building on foot. Yanni eventually calls up Jen’s office and finds out that she already left for the day, so he and Chuck drive over to her place. Coughlin approaches Jen outside her apartment building with the shirt on and bewitches her, but just as they start kissing, Phil appears and tackles him. Coughlin starts to whup his butt, but he dies moments later when the sarin gas finally runs its course. Phil and Jen reconcile and share a passionate kiss.

Chuck and Yanni then show up, and Phil gets the shirt off Coughlin and hands it to them, entrusting them to return it to Shirt Guy because he is going home with Jen. Chuck tells everyone that he will call the Department of Veteran Affairs and let them know about Coughlin’s death so they can properly deal with his body.

We then learn of what became of everyone afterwards:

Accepting that the shirt was not the answer to his problems with finding love, Chuck gave it back to Shirt Guy, with Yanni and his new girlfriend accompanying him. However, it is implied that he promptly stole it back due to being too insecure to part with all of the action that he was getting. 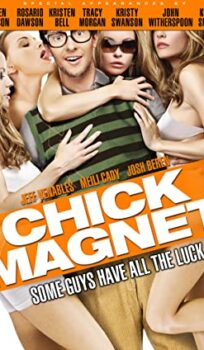