Malachai (Courtney Gains) and the rest of the cult eventually turn on Isaac (John Franklin), and they cut down Vicky (Linda Hamilton) from her cross and tie Isaac to it. Malachai then plots to bring Burt (Peter Horton) into the cornfield so he can sacrifice him, along with Vicky and Isaac, to He-Who-Walks-Behind-The-Rows, the corn demon that he and the cult worships. Job (Robby Kiger) and Sarah (AnneMarie McEvoy) – two children who befriended Burt and Vicky – lead Burt to a barn bordering the cornfield and show him the clearing where the sacrificing ground is located, since they knew Vicky was being held there. After telling them to sit and wait for him, Burt goes into the field.

After Isaac is taken by He-Who-Walks-Behind-The-Rows, Burt saves Vicky and beats up Malachai, and he makes the cult understand how blind they are and how any religion that lacks love and compassion is false. As they leave the field and abandon Malachai, Isaac suddenly re-appears, but is now possessed by the corn demon. In a deepened voice, he tells Malachai that the demon wants him, too, and then chokes him to death.

The demon then goes after Burt, Vicky, and all of the children, who take refuge in the barn. With help from Job and some of the other kids, Burt links some hoses up, then attaches one end to a gasohol still in the barn and the other end to the irrigation pumps outside. He turns the pumps on, spraying the entire cornfield with the flammable liquid, and then he lights it with a Molotov cocktail, setting the entire field ablaze, and He-Who-Walks-Behind-The-Rows is destroyed.

Burt and Vicky head back to their car with Job and Sarah, and after looking at the state it’s in, Burt tells them that they’ll have to walk the 19 miles to Hemingford, the nearest town. He and Vicky also decide to take in Job and Sarah. As Burt searches for a map in the front seat, a female cult member emerges from the back seat and tries to kill him. He manages to get out unharmed, and Vicky kicks the passenger door into her head, knocking her out. The four then begin the walk to Hemingford as the credits roll. 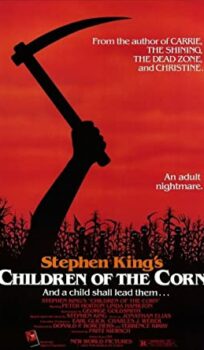