In 1980’s New York, Chinatown and Little Italy are heavily segregated by choice, thanks to racism, and the Italian and Chinese mafia that reside there. In the middle of this, pizza worker Tony (Richard Panebiano), falls for Tye (Sari Chang) on the dance floor. Problem is that their older brothers, Alby (James Russo) and Yung Gan (Russell Wong) are the youthful lieutenants of the Italian and Chinese gangs. They are constantly at war and believe people should stay on their own sides. Despite this, Tony and Tye’s relationship blossoms and they eventually make love for the first time.

While the Chinese and Italian Godfathers Gung Tu (James Hong) and Enrico Perito (Robert Miano) stress that peace brings true prosperity, the young members of their organization continue to fight each other and make unsanctioned moves. Yung Gan’s cousin Tsu Shin (Joey Chin) blows up a Chinese business in Little Italy when they refuse to pay protection money. In response, Tu and Perito punish their gangs, with the Triads directly murdering those responsible. Yung Gan is tasked with murdering his cousin, but in the end cannot do it and vows to flee back to Hong Kong with him. However, soon after, Yung Gan and Tsu Chin discover Tony and Tye’s relationship and everything boils over.

In a rage, Yung Gan confronts Alby with Tsu Chin and Tsu Chin stabs him to death. At his brother’s funeral, Tony realizes retribution is being planned and screams at Perito that more violence won’t bring his brother back. Tony goes to find Tye in Chinatown and they embrace as the Chinese and Italian gangs find them. Tye tells her brother that she loves Tony. Both gangs are unwilling to start a fight that will kill an innocent of their “own”, so they stand down. Yung Gan tells his sister “she is no longer Chinese” feeling she has betrayed him and his people but lets them leave.

Just as it appears Tony and Tye will be able to start a life together, Tsu Chin finds them. Enraged that Tye would betray her people, he aims a gun at the couple. Tye screams at him to stop, and shields Tony, but Tsu fires three shots, killing them both. Tsu Chin tries to run, only to be beaten by a mob of Triads and civilians, getting shot to death with his own gun. The film ends with a close up of the doomed couple, dead in the street, holding hands. A devastated Yung Gan arrives and cradles his sister’s body. His arrogance, inability to stop the war, and his decision to spare Tsu Chin has led to the death of his sister and the kind, innocent boy that loved her. 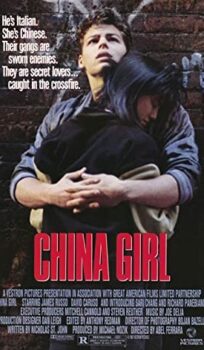