Andrew is a teen in Seattle who is bullied by his classmates, mentally and physically abused by his alcoholic father, and who’s mother is ill (implied to be suffering from cancer).  As an outlet for his misery, Andrew decides to start documenting his life with a video camera.

While at a party, the most popular guy in school Steve, along with Matt, ask Andrew if he can film them climbing down a hole in the middle of the woods that’s emitting a strange noise.  The three boys find a glowing object in the hole (it resembles Superman’s spaceship in the 1978 film) and start to suffer nosebleeds.

Weeks later, they all develop telekinetic powers.  This functions like a muscle; the more they use it, the stronger and more accurate they become, however too much use results in a nosebleed.  They eventually develop the ability to fly and all three become close friends.  Andrew’s social status gets a boost when, using his new found powers, he puts on a magic show during the school talent night that blows away the audience.  After the talent show, Andrew is the toast of the after party.  An embarrassing incident where Andrew (who had too much to drink) vomits all over a girl during a make out session makes him the school loser again.  Afterwards, Andrew’s father gets angry and physical over Andrew having an expensive camera (despite all the medical costs for Andrew’s suffering mother).  Andrew easily gains the upper hand in the struggle, and flies to the sky in a lightning storm, withdrawn and angry.  Steve finds him (it is implied all three boys also share a psychic bond) and tries to reason with him; Andrew, in a fit of rage, kills him through unknown means.

With his mother dying and unable to access medicine for her, Andrew puts his powers to use by robbing local thugs and a gas station.  During the gas station robbery, the attendant shoots at Andrew with a shotgun, blowing up the gas station and putting Andrew in the hospital, unconscious and burned.  His father sees him in the hospital and informs him his mother is dead, then angrily says it’s his fault.  This sends Andrew over the edge, and Matt through the psychic bond senses Andrew is in danger.

A battle ensues in downtown Seattle between Matt and Andrew, in which there is lots of destruction and several people are hurt.  Andrew is clearly the stronger one, and believes he is the next step in human evolution, showing no remorse for his actions; while Andrew screams in a rage, Matt sends the spear of a nerby statues and impales Andrew, killing him.

The film ends with Matt flying to Tibet (which Andrew said he always wanted to visit because it’s peaceful there). 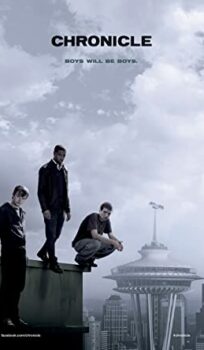