Based on a true story:

Jim Braddock (Russell Crowe) begins the movie as a fighter at the top of his game. But after a mix of bad luck, injuries, and the Great Depression, he is forced to fight in small towns for little money. After a particularly bad fight in which he breaks his hand, Braddock has his fighting license taken away.

Braddock works on the docks after this, building muscle and strength in his left hand to compensate for his broken right. He is barely able to make ends meet. In desperation, he accepts an offer from his old manager Joe Gould (Paul Giamatti in an Oscar nominated role) to fight an up and comer. He is expected to lose, but due to the new power of his left arm, Braddock knocks him out. The boxing commission allows him to start fighting again. Since Braddock had been a working-class loser, the down on their luck Depression fans love him, and dub him the “Cinderella Man.”

Eventually, Braddock works his way up to the heavyweight champion, Max Baer (Craig Bierko) a brute who has killed two fighters in the ring already. His wife will not support him in this fight, but gives her support right before the fight starts.

Braddock wins the fight by unanimous decision, and uses the winnings to buy a house for his family. 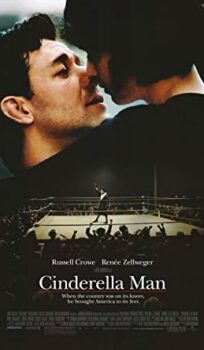