Duke (Jack Palance) is Curly’s twin brother. He helps Mitch (Billy Crystal), Phil (Daniel Stern), and Mitch’s brother Glen (Jon Lovitz) find the treasure on Curly’s map. Unfortunately, it is merely a booby treasure chest filled with lead bars painted gold. The group then learns that their whole adventure was followed every step of the way by a tour group led by Clay Stone (Noble Willingham). They always knew about Curly’s map when he used to work for them, but he didn’t want it to go public until he could meet with Duke. Obviously when Curly died in the first film, that would never happen, so Stone made it into an attraction.

Mitch is back in Las Vegas taking a well deserved shower after flying his wife over for “a great night of being yelled at” when Duke confronts him. He tells Mitch that he originally planned to steal the gold from them when they found it, but found out what the one thing from the first film is: honesty.

Duke just happens to also have the missing corner of the map in his hat, because his mother wanted her two boys to find the gold together. Instead, Duke decides it is best to share the REAL gold with the people Curly cared about the most, and presents Mitch with the first of several real gold bars claiming “It’s got friends!!! 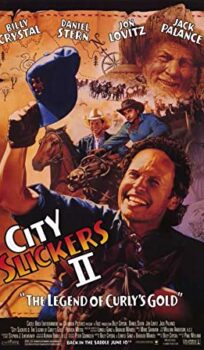