As Andy (Perry King) is at the school preparing his music class for their performance at the senior assembly, Stegman (Timothy Van Patten) and his gang sneak into his house, where his wife Diane (Merrie Lynn Ross) is getting herself dolled up for the event, and the male members pin her down and drug and rape her while Patsy (Lisa Langlois) takes a Polaroid of it. They then bring her to the school, and Patsy goes into the auditorium and has the Polaroid passed along to Andy while beckoning for him to follow her. Upon looking at the photo, Andy dashes after Patsy and gets lured by her into the lower levels of the building, where the gang starts playing a cat-and-mouse-style game with him, luring him to different places and then administering beatings to him when he reaches them. During this, Stegman shows Andy that he has Diane, and then he takes Diane up towards the roof.

Realizing that he will eventually get killed if he continues to play it the gang’s way, Andy decides to lure the gang to him. This results in him battling each member minus Stegman individually, and he directly or indirectly kills them all. Patsy dies last, but before she does, she confesses to Andy where Stegman is holding Diane and so he runs up to the roof. Soon after arriving there, Stegman lets go of Diane and then fights Andy until Andy hits him with a punch that sends him crashing through the skylight, leaving him hanging onto some ropes in the attic just above the skylight in the auditorium. Stegman begs Andy to show him mercy and help him back up, so Andy offers his hand, but after taking it, Stegman uses his free hand to grab a hidden knife and takes a swipe at Andy. He misses, and Andy angrily punches him again, sending him off of the ropes and through the second skylight. In the midst of the fall, another rope wraps around his neck, and he gets hanged right in front of the horrified assembly. Andy and Diane then embrace, relieved that it is all over now.

A final bit of text states that Andy was not prosecuted for murdering Stegman (and presumably the others) because the police could not find anyone who actually saw it happen. 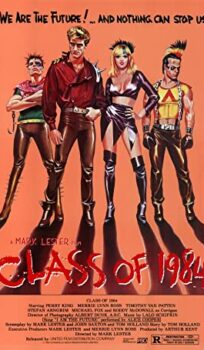