SHORT VERSION:
Cody eventually comes to believe that Hardin, Connors, and Bryles are not human beings (they’re battle droids), and that they are trying to set up confrontations between his gang, the Blackhearts, and the rival Razorheads so they will kill each other, and this belief becomes concrete when they kidnap his new lady love Christie one night as part of a plan to force another showdown between the gangs at the school.

After both gangs arrive there, Cody informs everyone about what the teachers are trying to do to them and that they have kidnapped Christie, and convinces them to join forces to combat this greater threat. In the end, Cody saves Christie, the teachers are destroyed (primarily through Cody’s ingenuity), and Dr. Forrest – the man who brought the droids to the school – also gets accidentally killed by Bryles, but only Cody and Christie make it out alive.

LONG VERSION:
Hardin (John P. Ryan), Connors (Pam Grier), and Bryles (Patrick Kilpatrick) – whose programming has reverted back to their original military function – orchestrate a confrontation between the Blackhearts and the Razorheads, planning to have them try to kill each other off and picking off members on both sides who don’t go down from the gunfire. Their plan works until Cody (Bradley Gregg) catches Hardin killing Reedy (Sean Hagerty), and then realizes that he isn’t human when he shoots him and he doesn’t go down. He tells the other Blackhearts and Christie (Traci Lind) about what he saw, but no one believes him. That night, Dr. Langford (Malcolm McDowell) – having grown disgusted with the trio of droids and how they seem to be waging war with his students – tells Dr. Forrest (Stacy Keach) that he wants the whole project terminated. Forrest responds by having the droids murder him, and then he has his team of scientists monitoring the droids murdered as well, since they too had raised several objections about the droids’ actions, as well as his own.

Still determined to wipe out the gangs, the droids plot another confrontation between them. One of them calls up the Razorheads’ leader Hector (Jimmy Medina Taggert) and impersonates Cody’s voice and calls him out for a showdown at the school. Connors then goes to Christie’s home and seizes her, then orders her to call Cody if she wants her father to live. After calling him up, Connors disguises her voice as Hector’s and tells Cody to come down to the school in an hour and face him if he wants to see Christie again. After hanging up, Cody points out to some other Blackhearts how it is unlike Hector to be at the school when he wouldn’t have to be, and he quickly realizes that the three teachers having been setting up their gangs the entire time and must be lying in wait at the school.

The Blackhearts face the Razorheads outside the school’s front gate, and Cody tells Hector that the three teachers have been running a game on their gangs, and now they have kidnapped Christie. He tells everyone that they are inside the school and he is going in there to waste them, so the gangs decide to forge a temporary truce to deal with this greater threat, and they proceed to blast their way into the school and start searching for them. When Cody and Hector first encounter Connors, they finally learn of how she and the others are droids.

Cody and fellow Blackheart Curt (Jason Oliver) manage to find Christie locked in a cell, but after Cody breaks in and unties her, Hardin appears. He soon pins Curt against a wall and kills him by using a claw/drill contraption from his right arm to drill into his head. When he attempts to do the same to Cody, Cody destroys him by grabbing a submachine gun and shooting his head to bits. He and Christie then spot Connors coming at them with her flamethrower arm at the ready, so they lead her on a chase all the way to the chemistry lab. They turn on all of the gas valves in there and Cody grabs a fire axe, and as she searches the room for them, Cody gets up and throws the axe at her to provoke her into attacking him, and then he and Christie get out as Connors uses her flamethrower and blows up both the lab and herself. Hector then meets up with them, and together they run from an approaching Bryles, who has his missile launcher arm exposed. They get back out to the front gate, and as Hector distracts Bryles, Cody hotwires a nearby armored school bus and drives it full speed into Bryles. As he and Christie jump out, the bus goes through the front doors and explodes with Bryles’s body getting pinned under a front tire. After Cody, Christie, and Hector re-enter the school to look for survivors, Bryles – now nearly stripped of his human appearance – revives himself.

As the trio enter the auto shop classroom due to Hector believing that he heard a gang member’s bike in there, Dr. Forrest suddenly springs out and holds Christie hostage with a gun. He explains to the trio that, while his robots may be scrap now, he still has his reputation as an upstanding citizen and must now kill all three of them to keep it that way. Hector tries to throw a knife at him, but he gets shot and killed for his troubles. Just as Forrest prepares to shoot Cody, Bryles appears behind him looking to grab Christie, but he unintentionally kills Forrest as he does so by running his arm through his body. Cody picks up Forrest’s gun and tries to use it, but Bryles backhands him and dazes him. Bryles then stalks Christie, but just as he is getting a hold of her, Cody starts up a forklift, raises the forks, and impales Bryles with one of them. He then has Christie wrap a hanging chain around Bryles’ neck, and after making a few revolutions to tighten it, he lowers the forks and rips Bryles’ body to pieces.

Cody kisses and hugs Christie, and they leave the school hand-in-hand as dawn breaks. 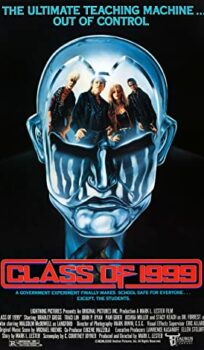