It turns out Caitlan (Lisa Spoonhauer) had sex with the old guy that Dante (Brian O’Halloran) allowed to use the employees only toilet and the loan of a porno mag. Appartently he died of a heart attack and rigor mortis started to kick in. Caitlin is taken away in an ambulance in a catatonic state. Veronica (Marylin Ghigliotti) angrily breaks up with Dante because Randall (Jeff Anderson) had told her earlier that Dante was getting back together with Caitlin. Later on when Randall pops into the Quick Stop, he and Dante have a fight that trashes the store. Dante bemaons the state of his life, but Randall gives him a reality check saying that he’s the one who came into work on his day off of his own choice. They clean up the store and make up. Randall does his dance leaving the store.

(Originally Kevin Smith had a longer ending, where after Randall left a robber comes in, shoots Dante and robs the store, but this was wisely cut). 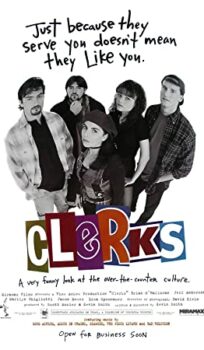