Pooper: (Thanks Curt, The Grand Poop-bah)
Everyone except Mr. Green did it.

Long Ending:
Note: Although at the time of release each ending was considered genuine, the DVD now notes that only one ending is the “true” ending

The film takes place in the 1950s. The general plot is that six people were invited to the home of “Mr. Boddy” (Lee Ving) for a dinner party and given aliases. It turns out that all six are being blackmailed by Mr. Boddy for the following reasons:
• Professor Plum (Christopher Lloyd) – Had inappropriate relationships with his female patients as a psychologist
• Miss Scarlet (Lesley Ann Warren) – Runs an illegal bordello in Washington DC
• Mr. Green (Michael McKean) – He is a homosexual, a fact that could cost him his job with the government.
• Mrs. Peacock (Eileen Brennan) – She sells her husband (a senator’s) votes for money
• Col. Mustard (Martin Mull) – He was a patron of Miss Scarlett’s business and also a war profiteer.
• Miss White (Madeline Kahn) – She may have killed two of her husbands.

They are joined by Mr. Boddy’s butler Wadsworth (Tim Curry) and his maid Yvette (Colleen Camp), both of whom have also been blackmailed by Mr. Boddy (he has info to implicate Wadsworth’s wife as a socialist, and Yvette was a call girl who worked at Miss Scarlet’s bordello). When the lights go out, someone kills Mr. Boddy and the cast races to determine who did it as more people who arrive over the course of the night are killed (and are later revealed to also have ties to each of the characters). The only major cast member to be killed is Yvette.

False Ending 1:
In this ending, the Wadsworth determines that Miss Scarlet is the culprit. She had been working with her former employee Yvette to kill Mr. Boddy and the others, only to betray and kill Yvette in order to tie up all lose ends. Miss Scarlet then intends to blackmail all the guests for sensitive information they all possess in order to sell it to the highest bidder. Since Wadsworth has no secrets, she threatens to shoot him, though he says that the revolver is out of bullets. The FBI then crashes in, revealing that Wadsworth was actually an FBI plant who wanted to expose the blackmailing ring. Miss Scarlet is arrested, though not before it was revealed that the revolver had in fact had one last bullet.

False Ending 2:
In this ending, the Wadsworth determines that Mrs. Peacock is the culprit. She was actually selling her husband’s votes not to lobbyists, but to foreign governments who sought to weaken the U.S. military as he sits on the Defense Council. Everyone agrees to keep her secret and she leaves the house. Again, Wadsworth is actually an FBI agent and his compatriots are outside where they arrest Mrs. Peacock.

Real Ending:
Wadsworth determines that almost everyone played a role in killing someone.
• Mrs. Peacock killed the cook, her former employee, who had given her secrets to Mr. Boddy.
• Professor Plum killed Mr. Boddy to get revenge and to end the blackmail.
• Miss White killed Yvette in a jealous rage as Yvette had an affair with Miss White’s second husband
• Col. Mustard killed the driver, who had served as his driver during the war and spilled the secret that Mustard was a war profiteer.
• Miss Scarlet killed the police officer who she had been bribing to keep the police away from her bordello and had leaked her secrets.

Wadsworth then reveals that he had killed the singing telegram delivery girl (who had been one of Professor Plum’s patients) as she was in the wrong place at the wrong time. He also reveals that he is actually Mr. Boddy and the person that they thought was Mr. Boddy was actually the butler. He intends to continue blackmailing them as he has new blackmail on all their murders (and though Mr. Green hadn’t killed anyone, he is considered an accessory).

As Wadsworth/Boddy turns to leave, Mr. Green takes out a gun and shoots him. The police then come in and it is revealed that Mr. Green was actually an undercover FBI plant who was investigating Wadsworth/Boddy the whole time. As the police enter to arrest the other guests, Mr. Green tells his supervisor that he killed Mr. Boddy in the hallway with the revolver. 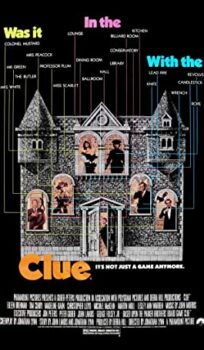