Things come to a head when Cher (Alicia Silverstone) and Tai (Brittany Murphy) have a fight that makes Cher realize that her popularity has waned, her priorities are completely out of whack and her romantic life is in a state of ruin. After much soul-searching (which, of course, includes a one-woman shopping spree around various Beverly Hills boutiques), Cher finally realizes that all of her desire to do good and help others is inspired by Josh, and furthermore, she has fallen in love with him.

Cher also realizes that her friends help her do good in various ways, and their combined inspirations cause her to get greatly involved with a humanitarian cause at school. While attending an Amateur Skateboarding League contest per a request from her now-working-to-become-sober classmate Travis (Breckin Meyer), who is competing in it, Tai meets up with her, and they settle their differences and become friends again. Tai and Travis also hook up.

Some time later, after Josh has a blowout with an employee of her lawyer father (Dan Hedeya), the employee calling Cher stupid within her range of hearing and blaming her for an error he made, Josh tells Cher she wasn’t stupid, and they talk to each other where they stumble over how to admit their mutual feelings for each other. It all culminates with a kiss between them.

The nerdy teachers Mr. Hall (Wallace Shawn) and Ms. Geist (Twink Caplan) fall in love and marry, with Cher, Dionne (Stacey Dash) (whom Cher has also reconciled with), Tai, and their respective boyfriends in attendance, and Cher catches the bouquet. She and Josh then kiss again. 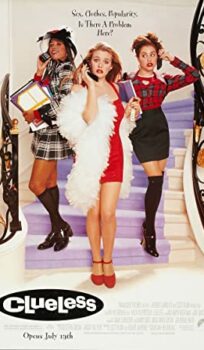