While back on Earth, Bess becomes pregnant with Art’s child, Alma gets offered a job to work at a preschool for foster children after working an impromptu shift with them, and Ben helps his grandson David (Barret Oliver) become better at baseball. Bernie also manages to find love with Ruby (Elaine Stritch), alleviating his depression over Rose’s death, and Kitty shows a lovelorn Jack a vision of his future, showing him with a wife and children, and his wife will have a small heart-shaped birthmark on her neck.

But, tragedy strikes when Alma goes to protect one of the preschoolers when he runs into the street to catch a ball and an oncoming car strikes her. After being told by a doctor that she wouldn’t survive the night, Joe sees her and transfers the last of his Antarean energy into her, saving her life but killing him. Before dying, he tells Alma to take the job and that he loves her.

The next night, before Ben, Mary, Art & Bess leave to meet the Antareans, Alma tells them she is staying on Earth to work at the preschool. Art, Ben, Kitty & David (who came along in secret) then enter the Oceanographic Institute and get the Antarean that is being held there out, and though the scientist Sara (Courteney Cox) sees Ben carrying the Antarean away, she doesn’t stop him, since there were plans to hand the Antarean over to the U.S. Air Force for experimentation and– because she took a liking to it –she didn’t want to see that happen to it.

After the four get the Antarean on Jack’s boat out at sea, Ben makes it known to everyone that he and Mary were going to stay on Earth as well, since family was more important than living forever and that they should not outlive their children. Then, the Antarean spaceship comes, and Walter comes down to meet everyone. The Antareans and Art & Bess– who have to go back to Antarea in order to see their child become born and grow up –say their goodbyes, and they and the cocoons left behind from the previous trip get picked up and brought onboard the spaceship, and then it flies off for Antarea.

After Jack waves goodbye to Ben, Mary & David once they arrive back at port, Sara comes up to Jack asking if he knew of a place where she could get some gas. They walk and talk for a bit, where Sara tells him she just quit her job. He eventually notices a small heart-shaped birthmark on her neck, and begins to woo her. 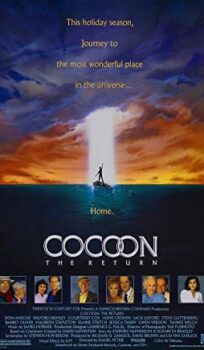