Short pooper:
Wiktor (Tomasz Kot) and Zula (Joanna Kulig), both despondent about the course their lives took after drifting apart over the years, apparently decide, upon reacquainting in Poland one last time, to commit suicide together.

Longer version:
Zula’s worsening alcoholism -as well as her jealousy for his past lovers, particularly the French poet Juliette (Jeanne Balibar)- takes a toll on her relationship with Wiktor. After the release of her musical album, which she disses as “a bastard”, she reveals her affair with Michel (Cédric Kahn), which angers him and prompts him to hit her; as a result, she disappears and goes back to Poland. He finds out about this from Michel himself and, after consulting a Polish Diplomat -who warns him he will be treated as a traitor and sent to prison-, he decides to return to Poland as well.

Sometime later, Zula, having found out Wiktor is doing a 15-year sentence in a labor camp over espionage and defection charges -and can no longer do music, due to his hand being mangled from torture-, visits him, offering to help free him and they share a tender moment. Another five years pass; Wiktor’s former colleague, Lech (Borys Szyc), arranged to have him released in exchange for Zula marrying him -they also had a son together-. Wiktor meets them at a club where she performs, but her drinking has all but destroyed her. Visibly shadows of their former selves, they run off together to the ruins of that church seen earlier in the film. There, they exchange marriage vows and take pills, in what looks like a suicide pact.

The film ends with them placidly sitting on a bench, watching a windy landscape. Zula suddenly says “let’s view it from the other side”; they both get up and walk away, off-screen, most likely implying their passing over. 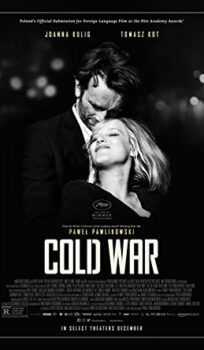