Pooper:
The ‘Color’ seems to ultimately burn itself out somehow; a large area around the farm is turned to ash, and it seems that nothing is left alive. In the aftermath the dam project is built and submerges the farm deep under water. In the last seconds of the film a weirdly-shaped flying animal is seen, implying that at least some of the effect remains. What the color was is never explained, and one character remarks that it was beyond any human science or understanding.

Longer Version:
Nathan Gardner (Nic Cage) is living on the family farm with his wife Theresa (Joley Richardson) and their kids, Lavinia (Madeline Archer), Benny (Brendan Meyer), and Jack (Julian Hilliard). The family is struggling financially, with Nathan attempting some small-scale farming of plants and Alpaca. Lavinia is into Wicca, and is embarrassed to encounter Ward (Elliot Knight), a young hydrologist, as she is doing a wiccan ritual. Ward is doing a survey of the water in the region in preparation for a dam project the mayor is planning to build.

That night a strange colored light fills the farm, and something descends from the sky to leave a small crater. The object seems to be some sort of meteor, but it behaves strangely – glowing at first, then turning to ash and seeming to sink into the ground. Things at the farm began to behave strangely; electrical equipment malfunctions, people go into a daze, Jack starts saying he’s hearing voices from their well. Animals also seem to be affected.

Whilst in a trance-like state Theresa cuts two of her fingers off with a kitchen knife. Nathan rushes her to hospital and is away a couple of days as surgeons reattach them. Things at the farm escalate, with a strange mutated insect emerging from the well. After their return, Nathan develops a rash which spreads over his arms. The Alpacas become mutated, merging together to form one large multi-headed creature. Nathan kills them with a shotgun. Later he finds Theresa and Jack have mutated and merged together. With the car refusing to start and all electrical equipment now non-functional they have no way to summon help or leave the farm. Nathan almost kills Theresa/Jack, but can’t bring himself to.

Ward also encounters mutated creatures, and he and the local Sheriff go to the farm. Theresa/Jack complete their transformation into some kind of alien creature, and Nathan finally kills her when she attacks Lavinia. The color is now completely covering the farmhouse and surrounding land. Nathan, Lavinia and Benny are killed by it as the effect becomes more and more intense. Before dying Lavinia claims that the Color is from another planet, and is transforming everything around it to be more like the place it came from. It is left unclear whether this is a deliberate intelligent act or just an effect caused by some form of energy.

The colour seems to burn itself out finally, destroying the farm and everything around it. Only Ward survives, apparently unaffected. Some time later he returns to the area, which has now been turned into a large reservoir by the dam. In voiceover he comments that he hopes whatever affected the farm is buried deep under the water, but even if it is he would never drink from here. He states that what the color did was beyond any human science or understanding, and will always remain a mystery. As he leaves a strangely mutated bird flies past, indicating that the effects of the color still remain. 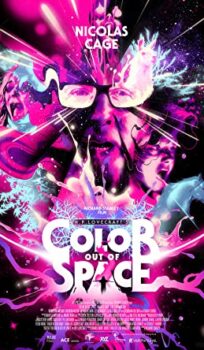