Raymond (Donal Logue) eventually decides to steal the comic book collection from Mrs. Cresswell (Eileen Brennan). However, feeling that he can’t do it alone, he approaches Carter (Cary Elwes) – an old bully from high school who is a comics-savvy but violent man – while he is at a strip club he frequents to watch his girlfriend Kiki (Monet Mazur) dance, and he manages to convince him to help him with the theft in exchange for half of the profits from the sales of the comics. The following morning, Conan (Danny Masterson) – who was the one who told both Raymond and the Links, Norman (Michael Rapaport) and Judy (Natasha Lyonne), about the collection – visits the Links’ store, and they tell him that they know he goes to Raymond’s store as well as theirs. They then offer him a bribe of free comics if he spies on Raymond for them to find out if he is planning to obtain the comic books before they can. He takes them up on it, and the next day, he overhears a conversation Raymond has with Archie (DJ Qualls) in his store about how he and Carter will be stealing the collection that night. Conan reports this to Norman and Judy and collects his bribe, and the duo ultimately decide to go and foil the robbery in the hope that Mrs. Cresswell will accept their offer to buy the comics out of gratitude for helping her.

That night, while Raymond is sitting in his car with Archie outside Mrs. Cresswell’s house and noticing how late Carter appears to be, Archie spots Carter’s truck parked in the back. The duo sneak inside and find that Carter has tied up Mrs. Cresswell and has already loaded most of the comics into his truck, and he plans to kill her so she can’t report him to the cops. Raymond then gets Carter’s attention and aims his gun at him while Archie unties Mrs. Cresswell, and Carter informs Raymond that he is double-crossing him, but is willing to let him and Archie go because they will be implicated in this crime if they talk. Raymond tells him that he would rather die than leave without the comics, so Carter pulls out a gun of his own. Norman and Judy then appear and Judy whips out her own gun, and Carter sets his gun down in apparent surrender just as Archie helps Mrs. Cresswell to her feet. As the tensions rise, Carter sneaks out a knife hidden in his coat sleeve and throws it in Raymond’s direction, but Mrs. Cresswell ends up taking it in her abdomen, having gotten in the way while ordering everyone to leave. Norman then tries to take Judy’s gun away from her, but it goes off into his arm. Carter grabs his gun and escapes in his truck, and though Archie orders Raymond to call 911, Raymond is more concerned about getting the comics and takes off to find Carter. The Links also leave for the same reason.

Archie tells the dying Mrs. Cresswell that he has to get help, but she pleads for him not to leave her side. He asks her why she didn’t sell the comics to either party, and she replies that, though her son David wasted his life collecting them, she couldn’t sell them because they were his things and she missed him so much. She then tells Archie to take whatever comics Carter left behind, as well as another collection in David’s closet, saying that he didn’t just collect comics. Archie starts to curse himself for not doing something to prevent what has happened to her, but she quiets him and says that she was already getting bored with her life, and then she dies.

To find out Carter’s whereabouts, Raymond secretly follows Kiki from the strip club to her apartment. He then breaks in, ties her up, and beats her until she reveals where Carter is, and it turns out that he is at a house he is fixing up (off-screen, someone later finds Kiki and calls 911, and she informs the cops that Raymond was her assailant). Raymond confronts Carter with gun drawn, and after a tense chat, he orders Carter to lose his gun and come with him. Carter complies, but as Raymond tries to lead him outside, Carter distracts him and hits him a couple of times and takes his gun. Raymond arms himself with a nail gun, and they shoot at each other until Carter uses up his ammo and runs off to his truck. Raymond grabs Carter’s initial gun and follows him outside, and when he sees him driving away, he hops into the driver’s side window. Carter drives wildly as he fights Raymond, and though he is able to knock Raymond off the truck, he is too late to stop himself from driving into a swamp and getting water all over the comics. When he gets back on land, Raymond hits him a few times before gunning him down.

While that all happens, Norman and Judy break into Raymond’s shop in the hope that Raymond has Carter’s phone number and/or address on file somewhere. As Norman searches over the main counter, the bad leg on it gives way, causing it to drop on his foot and break it and trap him. The pain also causes him to accidentally fling his lit cigarette into a box full of scrap paper, starting a fire that quickly spreads. After attempts to free him, put out the fire, and telephone for help all end in failure, Judy tells him that she must leave to find a payphone, but Norman begs her not to go. After some thought, she considers him a goner and shoots and kills him, and then heads back to her store in tears while Raymond’s store goes up in flames.

Raymond later drives by his store and sees what has become of it, so he goes over to the Links’ store. He heads inside with his gun in his hand and has a drink and a cigarette with Judy, and as they converse, she tells him that she accidentally set his store on fire and then they both confess to having killed someone. Two cops soon pull up outside after they spot Raymond’s car, and after he sees them, he tells Judy that he is leaving now, adding that he has nothing left and no reason to stay. He then asks if she is coming with him, but she refuses. He then goes outside and raises his gun in front of the officers so they will shoot him to death, which they do. Off-screen, Judy winds up getting arrested and sent to prison, and her shop is closed.

Through Archie’s narration, we learn that the guys he knew had to go to the next town to purchase their comics for a while after the events of that night, and apart from him, the only people who attended Raymond’s funeral were Conan and two other regular customers, which he found quite sad. Conan eventually gained ownership of the Links’ shop and reopened it, thanks to his wealthy mother, but this didn’t matter to Archie because he had already left town by then, plus he had gained quite a bit of cash himself. He explains that he did what Mrs. Cresswell had told him; he looked in her son’s closet and found a collection of baseball cards and memorabilia, and it turned out to be worth even more than the comic books. However, since he didn’t care for baseball, he sold the entire collection. He then used the money to go traveling, first around America and then Europe, and took his time to learn and grow at each place he visited before settling down in Barcelona, Spain, which he chose based on a story Mrs. Cresswell had told him of how she spent her honeymoon there with her late husband. Though he doesn’t know if selling the baseball paraphernalia made him as bad as the others, he takes pride in the fact that he did something with the money, which he believes Mrs. Cresswell would have wanted. After all that had happened, he had come to understand that life and the living of it is too fleeting to waste in one place or argue about different things pertaining to superheroes.

As the narration is reaching its end, Archie meets a beautiful woman as he leaves a café, and the movie ends with them on a date together. 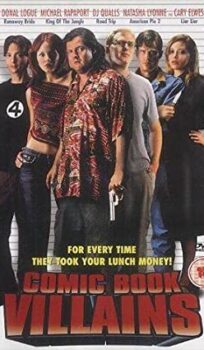