SHORT VERSION:
Conan, Jehnna, Malak, Zula, Akiro, and Bombaata obtain Dagoth’s horn at the ancient temple it resides in, but as they flee from its Keepers down a secret passage, Bombaata turns against the others without Jehnna noticing and blocks their path. He and Jehnna then gallop back to Shadizar with the horn, with him telling Jehnna that the others are right behind them. Once they return to the palace, Queen Taramis hypnotizes Jehnna and brings her into the throne room where the ceremony to awaken Dagoth is taking place, intending to sacrifice her at the first sign of life in Dagoth after she sets the horn on its forehead.

However, Conan and company sneak into the palace while the ceremony is underway, and when they run into Bombaata, Conan battles him and orders the others to save Jehnna. Conan ultimately kills Bombaata, and when the others enter the throne room, Zula kills Taramis’ Grand Vizier just as he is about to sacrifice Jehnna, and this causes Dagoth to be born as a grotesque monster instead of a beautiful human. He kills Taramis and starts to tear the palace apart with his power, but thankfully, Conan fights him until he kills him by tearing his horn off.

Jehnna becomes the new queen of Shadizar, and she appoints Zula as her captain of the guards, Malak as her court jester, and Akiro as her advisor. She asks Conan to rule Shadizar with her, but he declines, wanting to find his own kingdom and his own queen. She kisses him goodbye before he leaves to seek further adventures.

LONG VERSION:
Conan (Arnold Schwarzenegger), Malak (Tracey Walter), Jehnna (Olivia d’Abo), Bombaata (Wilt Chamberlain), Zula (Grace Jones), and Akiro (Mako) reach the ancient temple where the jeweled horn of the dreaming god Dagoth is, but as Jehnna approaches the pedestal within the crypt to place the Heart of Ahriman gem they earlier obtained from Toth-Amon (Pat Roach) onto it, Akiro takes a look at some engravings on a nearby wall. He finds that they tell of how Dagoth’s horn will be found by a virginal female child, and once the horn is placed on Dagoth’s forehead, he will awaken and bring about the end of the world, and the female child will be sacrificed as part of this. Realizing that Jehnna is this very child, he tries to tell Conan about it, but Conan silences him just after Jehnna has set the gem on the pedestal. A secret room containing the horn then opens up, and Jehnna walks in and takes it. Before the group leaves the crypt, Akiro warns Conan about what will become of Jehnna, but he doesn’t seem to care, only thinking about how Queen Taramis (Sarah Douglas) will bring Valeria back to life as a reward for his success.

When they reach the entrance, they find it blocked by a few dozen armed warriors who serve as the Keepers of the Horn, along with their wizard leader. They tell the band of heroes that they want Jehnna, but they refuse to hand her over, and they battle the warriors until they and Jehnna retreat back inside the crypt. Jehnna tells them of a tunnel that she saw in the horn’s room that could be a secret way out, and after they get inside the room, Jehnna and Bombaata go down the passageway first while the others continue to fight off the Keepers. After making sure that Jehnna is ahead of him and unable to see him, Bombaata brings down rock from the ceiling to block the path of the others, and Conan catches him as he is finishing this act. Bombaata then meets up with Jehnna and finds and smashes open a weak spot in the wall that leads to the outside, and they climb out and gallop back to Shadizar, with Bombaata telling Jehnna that the others will be coming behind them. The rest of the heroes get past the rocks and get outside, after which Conan tells the others that Taramis had planned this betrayal from the start and undoubtedly lied about being able to resurrect Valeria. The group then makes haste for Shadizar to save Jehnna.

Jehnna and Bombaata get back to Taramis’ palace, and Taramis later drugs Jehnna into hypnosis and begins the awakening ceremony in the throne room. Taramis is informed by her Grand Vizier (Jeff Corey) that Jehnna must be sacrificed at the first sign of life in Dagoth or else a catastrophe will befall them. Conan and company sneak into the castle through a secret passage Malak knows about, and as they make their way through the edifice, they end up crossing paths with Bombaata. Conan engages him in combat and orders the others to save Jehnna, and when they enter the throne room, Zula impales the Grand Vizier with her spear just as he is about to kill Jehnna. She soon breaks out of her trance, and Conan slays Bombaata.

Unfortunately, because Jehnna was not done away with at the right time, a catastrophe does occur when Dagoth comes to life as a vicious, grotesque monster rather than a beautiful human. Taramis tries to kill Jehnna herself in the desperate hope that the desired result can still happen, but Conan intervenes and pushes her towards Dagoth, who kills her. Conan then battles the beast himself, and despite receiving aid from both Zula and Malak, Dagoth proves to be too strong a foe. As Dagoth uses his power to start tearing the palace apart, Akiro yells to Conan that Dagoth’s life is tied to the horn and he must relieve him of that. Conan thus leaps onto Dagoth’s back and tears the horn off, and the beast soon dies. For good measure, Conan drives his sword into his head.

A day or two later, Jehnna is crowned as the new queen of Shadizar, and she appoints Zula as her captain of the guards, Malak as her court jester, and Akiro as her advisor. Since she has a crush on Conan, she asks him to rule Shadizar with her, but he refuses, saying that he wants to find his own kingdom and his own queen. Accepting his decision, she kisses him before he leaves the palace.

Akiro narrates that Conan mourned his lost Valeria, and then went on and sought adventure in distant lands and trod the jeweled thrones of the earth until, at last, he found his own kingdom, and wore his crown upon a troubled brow….

….but that is another story. 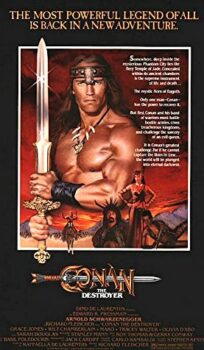