Pooper:
The entire main cast makes it out of the school alive, but the zombie virus (that affects only prepubescent children) has spread throughout the US.

Long Ending:
The film begins at the Fort Chicken chicken processing plant. A batch of chicken nuggets gets infected, but nobody notices. A young girl at a local elementary school is shown eating one of the infected nuggets.

Clint (Elijah Wood) is an aspiring writer living at home with his mother (cameo by Kate Flannery) in Fort Chicken. He agrees to be a substitute English teacher at his former elementary school. He arrives at work and reconnects with his childhood friend Lucy (Allison Pill), who now works as a teacher. He also meets Lucy’s hostile boyfriend/gym teacher Wade (Rainn Wilson) and fellow teachers Doug (Leigh Whannell), Tracy (Jack McBrayer), and Rebekkah (Nasim Pedrad).

In Clint’s class is the girl who ate the chicken nuggets and she is clearly deteriorating. She eventually bites school bully Patriot on the cheek. During recess, the girl bites another student, who scratches others, spreading the disease. The kids quickly devolve into zombie-like semi-sentient cannibals and attack the teachers and a police officer (cameo by Matt Jones). Only Clint, Lucy, Doug, Tracy and Rebekkah survive the initial attack and barricade themselves in a room. They are soon joined by two uninfected children – Calvin and Tamra. Doug soon determines that the disease only impacts prepubescent kids as though Clint and Tamra were scratched or bitten, they did not devolve into a zombie-like state. The group is also later joined by  Mr. Hatachi (Peter Kwong), the janitor who lives in the school. There is also relationship drama between Lucy, Clint and Wade (which is never resolved).

Ultimately, the teachers arm themselves and fight their way to Wade’s truck. Both Wade and Mr. Hatachi seemingly sacrifice themselves so the group can escape. They have one last conflict where they kill Patriot (who had stowed away in the truck). The group finds the neighboring town in ruins and see news reports that cities across the US are suffering from the adolescent zombie attacks. The group finally deduces that the chicken nuggets are to blame and Doug mentions that if he could find one of the nuggets, he could develop an antidote.

Chased by a band of kids into a seemingly abandoned building, the group finds one of the contaminated nuggets. They soon learn, however, that they have stumbled into a Chuck-E-Cheese-like play center and are surrounded by a horde of infected children. They are saved by Mr. Hatachi, Wade, and druggie/crossing guard Rick (Jorge Garcia) – all of whom ended up escaping the school after the group left. Wade douses the building in gasoline and lights the kids on fire while the group escapes with Doug in possession of the chicken nugget needed to synthesize an antidote (and the film abruptly ends). After the credits, the slow-talking Mr. Hatachi finally finishes an “inspirational” story he had tried to tell earlier in the film. 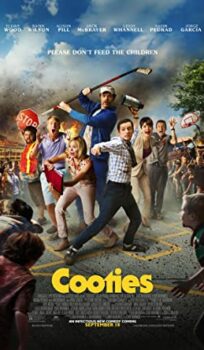