The Man (Shea Whigham) that Travis (James Freedson-Jackson) and Harrison (Hays Wellford) find in the trunk of Sheriff Kretzer’s (Kevin Bacon) cop car is no innocent victim. He apparently was involved in a drug deal gone bad with Kretzer. The dead man Kretzer dumped in the woods was his brother. The Man forces Harrison to trick Kretzer into an ambush.

Kretzer arrives but realizes something is wrong. A woman who was nearly ran off the road by the boys arrives, and Kretzer makes up a story, asking for her help to find his keys. While looking, she sees the Man, who shoots her in the head. Kretzer and the man trade gunfire and both are hit. The Man dies and Kretzer is badly wounded.

When the boys try to escape the car by shooting out a window, Travis is hit with a ricochet. Harrison begins to drive as Kretzer gets up and steals the dead woman’s car. Kretzer gets on the radio and tells them to give back his car, but with his friend dying Harrison refuses to listen and goes faster. Kretzer tries to run them off the road but Harrison sees a cow, swerving just in time. Kretzer hits the cow, presumably killing him in the crash. Harrison continues to drive faster, until he reaches civilization. The police radio turns on, looking for Kretzer. Harrison responds in order to get help for his friend. Whether Travis dies or not before they can get help is left unknown. 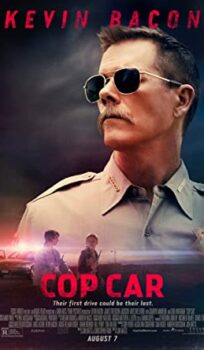