Steve and Terri Irwin save the croc from the CIA Agents, who they thought were poachers.
They actually came to Australia to locate a satellite beacon that the croc had swallowed.

Once the Agents identify themselves and explain their mission, Steve assures them that the beacon will come out in the croc’s poo, which of course it eventually does.

RIP my man! You were a hero to many of us! 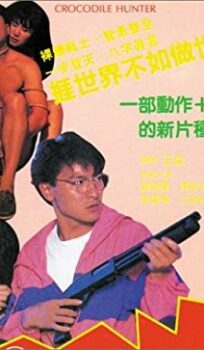