After escaping his own cremation, Jesús Gris (Federico Luppi) hides out in the attic of his house, cared for by his grand-daughter Aurora (Tamara Shanath). He then goes to the De La Guardia factory owned by Dieter De La Guardia (Claudio Brook) in an attempt to find out what has happened to him, with Aurora sneaking along too. Dieter confronts Jesús and tells him the Cronos devices has made him immortal, but with the price of a thirst for human blood. Dieter tries to kill Jesus by stabbing him, but Aurora hits him on the side of his head knocking him to the ground in a pool of blood. Jesús wants to drink the blood, but hears Dieter’s nephew Angel (Ron Perlman) approaching and flees with Aurora. Angel sees Dieter dying and celebrates gaining ownership of the business and finishes Dieter off when he sees he is still alive. Angel chases Jesús onto the huge De La Guardia sign on top of the factory. Jesús helps Aurora onto a ladder to help her escape but before he can climb down, Angel attacks him and beats him to the ground. Jesús throws himself at Angel, knocking him from the roof, through a window and killing him. Jesús, of course, is still alive thanks to the Cronos device. However, Jesús realizes he still wants blood and seeing that Aurora is bleeding he goes to feed on her. But he resists and smashes the Cronos device, effectively killing himself. Aurora helps him home and he dies in his bed with Aurora and his wife Mercedes (Margarita Isabel) by his side as the sun rises. 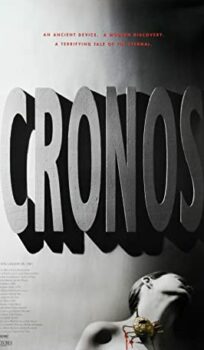