Estella has always been a mischievous girl with a creative talent for fashion. After her mother Catherine is killed when a trio of Dalmatians push her over a cliff, Estella is off on her own with her dog Buddy. She meets petty thief brothers Horace and Jasper Badun, and their dog Wink, and the three agree to work together as thieves to support themselves.

Ten years later, Estella (Emma Stone) continues to aspire for a career in fashion. She is noticed by Baroness Von Hellman (Emma Thompson) at her department store job when after Estella drunkenly redid the window display. Although Estella is excited to work for a big name in fashion like the Baroness, she soon realizes that the woman was responsible for Catherine’s death after she used her dog whistle to get the Dalmatians to push Catherine off the cliff when she tried asking the Baroness (who was her boss) for more money to support herself and Estella. Estella then adopts the persona of Cruella, a mysterious figure in fashion that sets out to upstage the Baroness and take back a necklace that belonged to Catherine.

Estella gets Cruella to become a sensation with help from her childhood friend Anita Darling (Kirby Howell-Baptiste), who is a journalist that gets the word out on Cruella’s exploits. However, Estella’s attitude starts to weigh on Horace and Jasper. She gets them to steal the Dalmatians since one of them ate the necklace during a heist gone wrong. After Cruella destroys the Baroness’s spring collection dresses and comes out in a dress made from Dalmatian fur (but she didn’t really kill them), the Baroness deduces that Cruella is Estella, and she has her henchman set fire to Estella’s home and frame Horace and Jasper for Cruella’s murder. However, she is saved by the Baroness’s valet, John, who reveals to Estella that the necklace holds a key that opens a box containing a birth certificate that reveals Estella is the Baroness’s daughter, but she ended up with Catherine after the Baroness ordered John to kill the baby so that being a mother would not hinder her success. Estella embraces her identity as Cruella and breaks Horace and Jasper out of jail and apologize to them before teaming up with John and another friend named Artie for the scheme to ruin the Baroness.

At one of the Baroness’s parties, Cruella steals her dog whistle and gets the Baroness to come out to the cliffside where Catherine died. After revealing to the Baroness that she is her real mother, the Baroness pretends to want to run the business with Cruella, only to push her off the cliff in full view of her guests, which leads to her arrest. Cruella then emerges and claims her inheritance.

Cruella allows people to think that Estella died so that she may run her new empire with Horace, Jasper, John, and Artie. Later, she brings Dalmatian puppies Pongo and Perdita to the Baroness’s former lawyer Roger and to Anita. 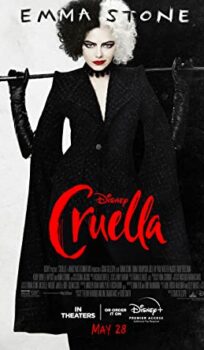