Pooper:
Nica (Fiona Dourif) is found by the police in her home with a bloodied knife and everyone in her home dead but her niece Alice. Nica holds in court that the Chucky doll did it all and is found incompetent to stand trial. She is sentenced to indefinite confinement in an asylum for the criminally insane. A cop takes the doll in an evidence bag to his car, where Jennifer Tilly (possessed by the soul of Tiffany) cuts his throat and mails Chucky to Alice.

Long Version:
Nica (Fiona Dourif) is a paraplegic living at home with her mother. One day they receive a package containing a Good Guy doll. Shortly thereafter, Nica discovers her mother dead. In rounding up the family, we are introduced to Nica’s older sister Barb (Danielle Bisutti), her husband Ian (Brendan Elliot), their daughter Alice (Summer Howell), nanny Jill (Maitland McConnell), and Father Frank (Ian Martinez). Alice discovers the Chucky doll and falls in love with him.

During dinner preparation, Chucky poisons one of the bowls of soup with rat poison. Father Frank is the unfortunate victim, but he dies in a car accident and is decapitated.

Overnight, Chucky locks Alice in a closet before wreaking his signature havoc on the family. He kills Jill by electrocuting her during a video chat session with Barb, with whom she is having an affair (a subplot revealed to Ian by a button-size nannycam in Chucky’s overalls). Chucky kills Barb by stabbing her in the eye, and attempts to kill Nica with carbon monoxide by running the engine of a car in the garage.

Ian discovers Nica as she is going into cardiac arrest, but injects her with adrenaline just as she goes unconscious. She wakes up tied to her wheelchair with her mouth duct taped, while Ian reviews the tape that shows that Chucky was behind it all. After Chucky kills Ian, he chases Nica through the house.

Ultimately it is revealed that Nica’s mother was having an affair with Charles Lee Ray (Brad Dourif) back in the 80’s. After he killed her father, Ray tied up Nica’s mother while she was still pregnant with Nica, and stabbed her in the belly when he finds out she had called the cops on him. Though his intent was to kill Nica, he only paralyzed her. While Chucky monologues about his 25 years of slashing, Nica realizes that he never killed Andy Barclay and taunts him. When Chucky attacks her, she stabs him with his own knife, and then the police arrive at her house.

When the judge rules that Nica is incompetent to stand trial, she is wheeled away to an asylum for the criminally insane, but not before she laughs at the Chucky doll in evidence claiming she’s still alive and laughing as they wheel her out.

Outside the courthouse, a police officer carries the doll in a bag to his car, where Jennifer Tilly (possessed by the soul of Tiffany in the previous film) cuts his throat and asks Chucky “Who’s next?”

Chucky is mailed to Alice, and suggests a game of “Hide the Soul” and recites the incantation while Alice’s grandmother dies from being suffocated by a plastic bag.

After the credits, a delivery is made to Andy Barclay (Alex Vincent) who immediately shoots Chucky with a shotgun.

Not nearly as genuinely scary as the first one, without the comedy of the previous two, but definitely a movie I enjoyed watching once. 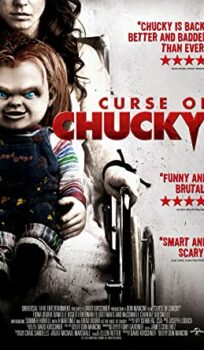