A demon worship cult is gaining members in rural England. Their leader, Karswell, supposedly has magical powers. Professor Harrington is a scientist out to prove that these magical powers are fake.  When Harrington dies under mysterious circumstances, John Holden (Dana Andrews) takes on the investigation of Karswell.

As more bizarre events occur, Holden begins to believe that Karswell may have some strange power.  Karswell learned that Stonehenge was built as a magical trap to restrain an ancient evil demon.  Karswell found a way to tap into the powers of this demon, but now lives in dread of what he has unleashed. Holden receives warnings that he will die at 10PM.  Others, such as Harrington, who received these warnings all died at the appointed time.

Holden learns that there is a parchment with ancient hieroglyphics which Karswell gives to those he wants dead.  The demon then kills them.

Holden finds the parchment among some papers Karswell gave him.  The only way to prevent his death is to return the parchment to Karswell.

Holden pursues Karswell onto a train.  Karswell refuses to accept anything Holden tries to give him.  Holden slips the parchment into Karswell’s coat pocket, when he hands Karswell his coat.  Realizing he has accepted the parchment back, Karswell flees the train in terror. The demon kills Karswell, but when investigators arrive, they conclude he must have been hit by a train. 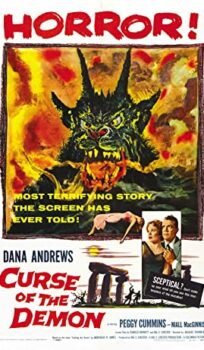