One day, the Ducks get informed by the dean of Eden Hall that a school board meeting was going to be held soon, and the topic would be the revocation of their scholarships. If they were revoked, then they would have to leave the school at the end of the semester. Refusing to let this happen, the Ducks and Coach Orion (Jeffrey Nordling) attend the meeting, and they bring out Gordon (Emilio Estevez) as their lawyer. Using his legal expertise, Gordon informs the board that the Ducks’ scholarships are being revoked without cause, and should they go through with the revocation, he’d slap them with a lawsuit. Unwilling to have this taken to court, the board reinstates the Ducks’ scholarships. The Ducks then get to training for their big game against the Warriors, and afterwards, Orion gives them back their old Ducks jerseys.

For the first two periods of the game, neither team is able to score. However, before the third period starts, Dean Portman (Aaron Lohr) comes into the Ducks’ locker room, where he reveals that he got into Eden Hall on a full scholarship like the other Ducks (courtesy of Gordon), rousing them up for the final period. The third period is also scoreless up until the closing seconds: Charlie (Joshua Jackson) is on a breakaway to the Warriors’ net, but instead of shooting the puck into the net, he makes a surprise pass to Goldberg (Shaun Weiss). Goldberg takes the shot and scores, winning the game for the Ducks.

As the Ducks are celebrating, Charlie notices Gordon in the stands, and they nod at each other approvingly before Gordon directs his attention to the scoreboard. A banner drops down from it that shows the Ducks logo in the colors of Eden Hall, and the name “Eden Hall Ducks” on it. Charlie then kisses his love interest Linda (Margot Finley) and goes back to celebrating with his teammates, while Gordon walks off to the exit, smiling. 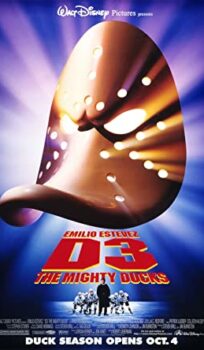