Ron Woodroff (Matthew Mconaughey) is given thirty days to live when he is diagnosed with Aids. He can’t seem to get his hands on the “Aids Drug,” AZT. He buys (illegally) from the hospital janitor until the hospital decides to lock up their AZT.

Meanwhile, Dr. Eve Saks (Jennifer Garner) is trying to get AZT to be approved quicker. Eve and her partner (Dennis O’ Hare) are testing out AZT on many AIDS patients including Rayon (Jared Leto), a transsexual. It’s not working.

Ron begins smuggling non-toxic drugs into the USA from Mexico. He sells to Rayon and they begin a “buyers club.” Ron is an extreme homophobe and only works with Rayon so she can sell to the gay community because Ron refuses to.

Shit hits the fan when Ron has a heart attack at the airport smuggling his drugs. The FDA takes them all. Everyone in the buyers club is getting sicker (especially Rayon.) Ron tells them not to go to the hospital as they will all have to take AZT. Ron says that it will kill them.

Ron travels to Japan and multiple other places to find other non-toxic Aids medication. Will Ron is gone Rayon gets increasingly sick and her boyfriend carries her to the hospital when she passes out.

Ron returns unsuccessfully. He finds out that Rayon has died when she was given AZT. He attacks Eve and her partner. Eve realizes that AZT isn’t working and that the FDA knows that as well.

Her and Ron sue the FDA for providing medication that may not fully work. Though he gives an interesting and passionate case, there is not enough medical info. He loses.

Because of Ron, there are other meds for Aids and testing and processing of drugs is quicker. Ron died on September 12, 1992. He didn’t live 30 days. He lived 2191 days. 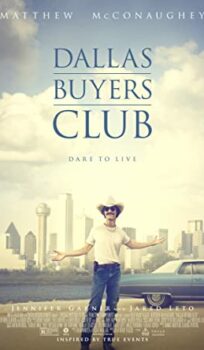