Veronica Franco (Catherine McCormack) is a young woman in Venice, born to an old, if not wealthy family. She falls in love with the brother of her best friend, Marco (Rufus Sewell) but he cannot marry her as his marriage has to be a marriage of state. Veronica’s mother (Jacqueline Bisset) informs her that if she will not marry another, and if she does not wish to enter a convent, the other option available to her is to become a courtesan. Veronica is hesitant at first but soon realizes the potential freedom and power available, not to mention the fact that courtesans were some of the most educated women in Venice.

She quickly becomes the most famous courtesan in Venice as well as a well known poetess. She rebuffs Marco’s advances, still angry over his unwillingness to marry her (and that he himself has married {see Naomi Watts in a small role}), eventually however they become lovers and she even agrees to leave the life of a courtesan and become his mistress. However, war strikes and when the King of France comes, it is Veronica who seduces him into helping the Italians, and Marco leaves for war angry.

While he, and most of the men at court, are gone, the plague arrives and thousands die. In the panic and chaos that comes after, the Inquisition suddenly gains power and they target the courtesans of Venice as symbols of the city’s lax morals. Marco returns home just in time to see Veronica imprisoned for witchcraft, and though a senator, he has no jurisdiction at her trial. The trial is spearheaded by Marco’s old friend Maffio (Oliver Platt), a rival poet of Veronica’s who holds a grudge for her refusals of him. Veronica refuses to confess, but when Marco shames the men of Venice who had celebrated her and have now abandoned her, they confess to being her accomplices and the Doge calls an end to the trial lest all of the court be imprisoned. The Inquisitioner leaves, disgusted with the lax morals of Venice. Veronica leaves court once more and becomes Marco’s mistress, which she remains for the rest of her life.

Veronica Franco really existed, she was a poet and one of the most famous courtesans in Venice, and most, if not all, of the movie is based on her life. 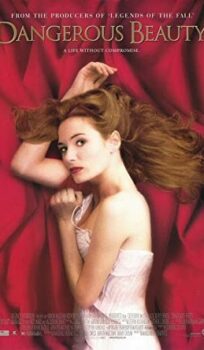