Ruth and John (Jeanne Crain and Carl Betz) have married after only knowing each other for a month. They leave on a honeymoon cruise. As soon as the ship sails, John disappears. No one remembers seeing him. There is no record of him as a passenger, and she is listed under her maiden name. While the ship’s doctor (Michael Rennie) takes an interest in her, the rest of the crew suspect she is insane.

John calls her room phone, and tells her to trust no one. She searches the ship, but can not find him. He shows up one night, and tells her to meet him on deck late, then runs off. Ruth tells the doctor that her wealthy father, died recently and left her a fortune. Her uncle, hated the father, and thinks it should have gone to him. Ruth suspects the uncle wants to kill her and John.

John is actually the 3rd officer of the ship. He has faked being sick and stayed down in his cabin, since leaving her at the beginning. Ruth’s cabin maid is in with him in a plot. When Ruth meets John, he tells her that he has plotted this to kill her, and have everyone think she committed suicide. John tries to throw her overboard. The doctor followed her, and fights John. In the struggle, John falls overboard and dies. 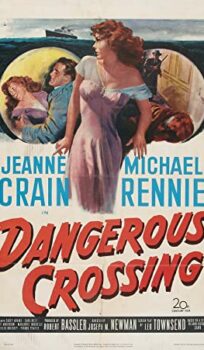