As the days pass, Danny (Rhys Ifans) – whom the people of Clarence know as Professor Daniels – comes to adore Clarence and the people in it, having found his ideal simple life there, and he also becomes a campaign manager for Jim Craig (Anthony Phelan), who is running in an election to become a member of the State Parliament.

One day, Jim has an extramarital tryst with Glenda’s (Miranda Otto) friend Maggie (Jeanette Cronin), but he becomes so wrapped up in it that he doesn’t notice that he is running late for a meeting at the town hall where he is due to deliver a speech. After he finally realizes how late he is, he calls Danny at the town hall, and after making a false excuse as to his whereabouts, he tells Danny that he is going to have to do his speech for him, to which Danny reluctantly agrees. However, Danny soon turns the speech into an impassioned one where he points out how the “little blokes” in the town that Jim claims he represents are very vital to maintaining the town’s stability and how they have proven to him that you don’t have to be a bigwig to be a somebody, and it receives a big round of applause. That night, the mutual attraction he has been nurturing with Glenda since his arrival in Clarence culminates in them having sex back at her house.

However, throughout the course of that same day, some local kids – which includes Maggie’s son Max (Serge Cockburn) – find the deckchair that Danny flew into town on. Max brings it home to Maggie, and she, in turn, gives it to Dave (Frank Magree), Glenda’s sergeant, that night and states her belief that this is the chair that Danny used. Dave quickly draws the conclusion that Professor Daniels is Danny, and – primarily out of jealousy over how Danny has been courting Glenda since he has feelings for her (despite the fact that Glenda is not into him) – he manages to call up the news reporter Sandy Upman (Rhys Muldoon) (who has been capitalizing on Danny’s story and the [half-hearted] suffering of his girlfriend Trudy [Justine Clarke] for his own benefit [though Trudy has willingly had sex with him]) and lets him know of his discovery and that Danny is in Clarence. Sandy, in turn, telephones Trudy and says that he thinks he found Danny, but he tells her to keep this to herself (out of wanting to be the reporter who finds Danny first). Sandy picks up Trudy the next morning and they head for the airport to get a flight to Clarence, but rival news networks have followed them there and overhear where they are going, so Sandy calls his network and demands the use of one of their helicopters so he and Trudy can get to Clarence ahead of them.

That same morning, Danny and Glenda chat, and he tells her that he is from Sydney and is the deckchair flier from the news, but she thinks that he is kidding. Before he can reveal more, he is interrupted by visiting townsfolk when they come knocking on Glenda’s door, and they praise him for his speech before showing him a newspaper article suggesting that he might be a new candidate in the political race. He leaves the house to go talk to Jim about this, but he doesn’t get far; Dave shows up leading a bunch of reporters and cameramen right to him. He turns and runs, with Glenda and the townsfolk watching him as he goes, but his escape is cut off when Sandy’s helicopter lands in front of him and Sandy and Trudy step out of it. As Trudy kisses Danny’s face and Sandy raises his arm to celebrate having found him, the stunned Danny looks at the shocked Glenda, who go back towards her house. Danny tries to go after her, but Sandy won’t relinquish his grip, so Danny hits him with a knockout punch to make him do so (an action made easy by the fact that he had already come to believe that Trudy had an affair with Sandy). Danny tries to explain himself to Glenda, but she tells him to get lost, thinking that she was just some fling of his. Danny is then ushered into the helicopter, but Trudy closes the door on Sandy after he wakes up, telling him that it is not a good idea for him to come along. The pilots – who evidently don’t like Sandy – then get the chopper airborne, and all Danny does is look at Glenda until she leaves his field of vision, and Glenda does likewise with him.

The next day, Glenda comes to the decision that her life is going nowhere and she needs to make a fresh start, so she goes to the police station and turns in her badge, telling Dave that she is tired of doing this job and she needs to get out of Clarence. Meanwhile, Danny returns to his old job, but while stuck at a highway construction blockade in his cement truck with his friend and co-worker Pete (John Batchelor), his heart and mind get overwhelmed by a combination of the unpleasant sights and sounds of big city life and Pete’s rather uncouth and grilling questions about who Glenda was and whether or not he had a meaningless fling with her. Suddenly, Danny sees a happy couple drive past on a motorcycle that reminds him of his time riding with Glenda, and he decides then and there that he must go back to her, so he up and abandons Pete and the truck and starts walking. He ends up walking all the way to Trudy’s real estate office, where he sees her arguing with Sandy outside after he came in and yelled at her for leaving him in Clarence and how he lost his job because of what she did. Danny interrupts and asks Sandy if he can have a moment alone with Trudy, and after Sandy steps aside, Danny tells her that their relationship just isn’t going to work. She replies that that’s not fair, because thanks to one of his crazy ideas, they have a chance to really go somewhere (that being the high life that she craves so much). He replies that he knows what she wants, and it’s not him, and adds that the publicity surrounding him will inevitably blow over, and when it does, they will just be right back where they started. She asks him what happened to him up in Clarence, and he replies “Everything.” Trudy thus accepts that this is the end for them, and they give each other a goodbye hug. As he walks away, Danny sees a plane passing overhead and gets an idea.

Through a connection with an Air Force commander that his media storm has forged, Danny gets on a military plane and flies over Clarence, then jumps out and parachutes towards the town, landing once again in Glenda’s backyard just as she is about to leave her home. She is initially happy to see him, but she quickly changes her tune and starts heading towards her motorcycle. He tells her how sorry he is for everything and also states that his relationship with Trudy is over, but she replies that he can’t just drop back into her life, apologize, and then expect for them to go back to the way they were, to which he says that he will do whatever it takes to make things right with her. She soon drives off with him running after her, and after he gives up the chase, we see that one of his parachute cords is tangled on the back of the motorcycle. He soon gets pulled into the air and starts parasailing right behind the bike, which does not escape Glenda’s notice, and he yells out to her that he loves her. She smiles and stops the motorbike, then catches him as he comes down, and they share a passionate kiss.

The movie ends with Danny and Glenda sitting on deckchairs out in her backyard in the morning sun and talking about their future plans, specifically a backpacking adventure somewhere in the world. As they do so, their chairs symbolically float upward. 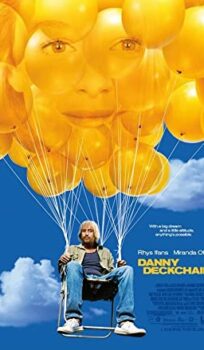