In 2008, the case against DuPont seemingly reaches a major breakthrough when, after obtaining blood samples from almost 70,000 people for the sake of the independent study needed to move things forward, Robert (Mark Ruffalo) gets wind of this as good news and an indicator that they have won.

Unfortunately, four more years pass after this and things have come to a standstill on the case; we also see the funeral of Wilbur Tennant (Bill Camp), who has died of cancer, and that his wife is now also confined to a wheelchair. Robert has had to undergo pay cuts, due to the financial strain the case has put on the firm, and this, in turn, has caused issues in his private life and his health -the tics and twitches noticeable around halfway through the film, which he insisted in ignoring, escalate and intensify-. He ends up having to be hospitalized due to a Transient Ischemic Attack. While at the hospital, his wife Sarah (Anne Hathaway) confronts his boss Tom (Tim Robbins) for not giving Robert the credit he deserved for his titanic effort and devotion to that cause.

Another three years later, in 2015, Robert receives a phone call from the scientific team conducting the study, finally revealing that PFOA is, indeed, responsible for multiple deadly diseases, thus making DuPont officially liable and responsible for the whole malfeasance. However, the corporation intends to back out of their agreement and let it completely cool off; this bolsters Robert to go after DuPont, one defendant at a time, as the movie ends.

Title cards show that this course of action caused a domino effect in which the first three settlements were won against the corporation, with millions of dollars awarded to the plaintiffs and, ultimately, DuPont had to settle the whole class action for almost $700 million. Also, before the credits roll, we see quick shots of some real life characters mentioned in the film (the Bucky kid; Joe Kiger’s brother; the real-life Robert Bilott and his wife), who appeared in cameos. 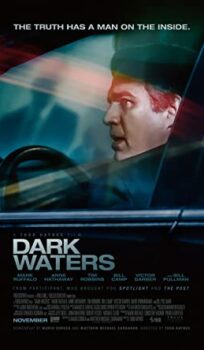