After researching into the house, Regina (Anna Paquin) and Carlos (Fele Martínez) find out that it was the scene of a sacrifice. There is still one more child necessary to complete the spell and bring back complete darkness and chaos to the world. Regina discovers that the grandfather was part of the ritual that took place 40 years prior to the events taking place in the “present,” and the boy running away in the beginning of the film was his son (Regina’s father). Regina visits him one final time and sees a painting on the wall depicting a strange ceremony involving children. He ties her up and explains that he couldn’t complete the ritual because he “…didn’t love his son…” and was forced to let him go. Darkness needs seven children killed in a ritualistic fashion by loving hands. She assumes Darkness is after her younger brother Paul (Stephan Enquist). The real catch is for Darkness to take over, the original child (Regina’s father) must still be killed, by loving hands. The idea is that the mother will kill her husband in order to protect her son. When Regina begins crying for her father, saying how much she loved him, the grandfather set her free. He realizes that the daughter would be the one to perform the killing, and that Darkness with its supreme intelligence and cleverness knew how to get what it wanted and would act accordingly. When she makes it back to the house, her mother is frantically trying to perform a tracheotomy on her choking husband and can’t seem to bring herself to perform the act (too weak?). Regina takes over and makes the incision in his throat, but in the pitch-black darkness of the eclipse the pen they would use rolls away. Regina’s father bleeds to death and ultimately dies on the altar that was uncovered beneath the floor of the living room. Regina and Paul manage to escape by climbing out a window just as her boyfriend Carlos pulls up in his beetle and they drive away… but nothing is what it seems to be. The ritual completed, Darkness is now free to roam. The real Carlos shows up at the house moments later and is tricked by Darkness into entering. The final scene is a wide-angle shot of the beetle with Regina, Paul and the creature impersonating Carlos as it drives off into a dark tunnel. 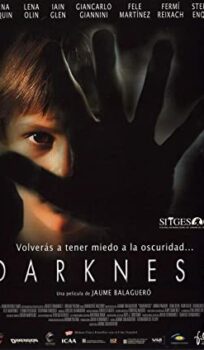