Elliott and Beverly Mantle (both played by Jeremy Irons) are twin gynecologists.  Elliott is a seductive type who lures women to the Mantle Clinic, and then the other brother, Beverly, is given them when he’s done with them.  Beverly becomes infatuated with an actress (Genevieve Bujold), and it disrupts this rhythm between the twins, even causing delusions of grandeur that involve the likes of mutant women.  Really weird.

The film ends with Beverly and Elliott both dead from a mutually agreed murder/suicide situation, in a strange position. 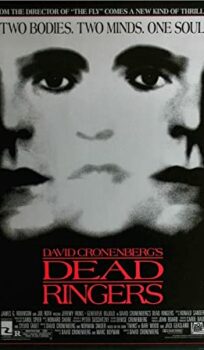