POOPER:
Addison and his sister Liza just robbed a casino, but are forced to flee in a blizzard.  They split up, with Jay picking up Liza and Addison walking through the woods.  Jay and Liza fall in love. Addison kills several people, including a cop, before taking Jay’s parents hostage.  Jay tells the protective Addison that he loves Liza, but she shoots and kills Addison before he could kill Jay.

LONG VERSION:
Addison (Eric Bana) and his sister Liza (Olivia Wilde) have just pulled off a casino heist, along with their partner who is driving the getaway car.  The plan is to escape to Canada.  They are on an icy road in a remote part of northern Michigan when they hit a deer and flip over, killing the driver.  A passing policeman offers assistance, but Addison shoots him to death.  Addison then tells Liza they will split up and reunite across the border.  She should get a ride and he’ll walk through the woods, even though a blizzard is expected in the area soon.  At the same time, ex-boxer Jay (Charlie Hunnam) has just been released from prison and is meeting with his former coach in Detroit who owes him money.  The coach refuses to pay, and they get in a fight, in which Jay knocks out the coach.  Thinking he killed him, Jay flees.  Jay then calls his parents Chet and June (Kris Kristofferson, Sissy Spacek), and tells them he will be coming home for Thanksgiving dinner.  They live in the same town where Addison and Liza had their accident.

Later that day, in the town where the policeman was killed, Sheriff Becker (Treat Williams) is heading up the search for the killer, but he tells Deputy Hanna (Kate Mara), who is also his daughter, so stay at the station to help others.  Driving off main roads to avoid the police, Jay sees Liza freezing on the road and picks her up.  They end up at a nearby truck stop because the storm has closed the roads.  She sees his parent’s address and calls Addison to tell him to meet her there.  Jay and Liza talk for a while and begin to hit it off, and they end up having sex in a nearby motel.  As for Addison, he encountered a man fixing his snowmobile.  They fight, with Addison killing the man, but he loses a finger as a result.  He rides to a nearby cabin and sees a drunk man abusing his wife and kids because she wants to go to her mother’s house but he doesn’t.  He breaks in, kills that man, dumps his body in the nearby creek, and feeds and comforts the wife and kids.

The next morning (Thanksgiving Day), Hanna gets a call from a woman who is worried that her daughter and grandkids did not show up at her house.  Hanna and a pair of deputies ride their snowmobiles to her cabin, and it’s the same one Addison is hiding in.  Just as one deputy is about to knock on the door, Hanna sees the dead man in the creek and yells.  Addison hears her yell and shoots the deputy at the door dead.  He then gets back on his snowmobile and Hanna and the other deputy give chase.  Addison drives several miles to a frozen lake, and removes the marker hanging on the barbed wire fence.  The other deputy chases Addison onto the lake, but is garroted by the barbed wire and dies.  Hanna then shoots at Addison, hitting him in the leg, but he gets away.  Meanwhile, Liza has developed feelings for Jay and she calls Addison back and tells him not to go to that house, but he never gets that message (he lost his phone).

Later, Addison arrives at Chet and June’s house and holds them hostage.  When Jay and Liza arrive, he ties them up as well, pretending not to know Liza.  Hanna, having just returned to the police station, takes a call from a Detroit detective looking for Jay to question him in the attack on the coach, who only suffered a concussion.  Hanna, who earlier was invited by June to attend Thanksgiving dinner, shows up at their house to ask about Jay and is promptly taken hostage by Addison.  At the dinner table, Addison fesses up that he is Liza’s brother, and he has always been protective of her since he killed their abusive father years ago.  She says that she was grateful for that protection, but she wants him to let her go now.

Sheriff Becker, following the snowmobile tracks, finds it at Chet and June’s place and calls for backup.  However, Hanna’s police radio was still turned on and Addison heard the police call.  Becker then enters the house and shoots Addison in the back, but it was actually Hanna, who was wearing Addison’s jacket because he put it on her.  Addison then shoots Becker, then Jay and Addison get in a fight.  Jay has overpowered him, but Liza begs him to let go of her brother, which he does.  Addison then asks Jay if he truly loves Liza, and he says yes.  But before he can reach his gun to kill Jay, Liza gets it and shoots Addison to death.  The movie ends with Jay and Liza together, a severely wounded Becker loaded in an ambulance, and an uninjured Hanna revealing she was wearing a bulletproof vest. 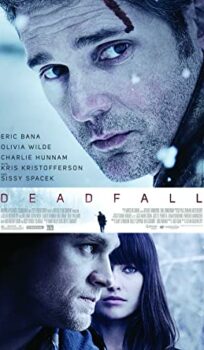