Pooper:
Light predicted Mia’s betrayal and was able to use the Death Note to kill her, publicly clear his name, get L fired, and destroy the page of the book bearing his name. The movie ends with L finding a page of the death note and considering whether to write Light’s name upon it.

Long Ending:
High school student Light Turner (Nat Wolff) finds a book entitled “Death Note” at his school. He picks up the Death Note and is immediately able to see an otherworldly entity named Ryuk (voiced by Willem Dafoe). Ryuk explains that the Death Note gives its owner the power to kill any individual by writing their name in the Death Note so long as Light knows the individual’s name and face. Light uses the Death Note to kill a school bully, bank robber, and the man who murdered his mother. Light also discovers that he can control the actions of a person whose name is written in the Death Note for 48 hours prior to their death.

Light tells his high school crush Mia (Margaret Qualley) about the Death Note and she becomes obsessed with the book. The pair start dating over and begin using the Death Note to kill criminals whose names and faces are publicly broadcast or published in the news. Using the Death Note, they force the criminals to write the name “Kira” (allegedly, Japanese for the word killer) before dying. As Kira’s actions are publicized, many people in the public come to believe that Kira is a savior who is cleansing the world of all scum. Meanwhile, Light becomes more suspect of Ryuk’s motives and concerned about Mia’s ruthlessness.

An anti-Kira task force is started. It is presided over a detective nicknamed L (Lakeith Stanfield). L is able to track Kira to Light’s hometown upon recognizing that the three earlier deaths were also attributable to Kira. He also deduces that Kira needs a full name and face to kill his victims. He invites a local cop named James (Shea Whigham), who happens to be Light’s father, to join the task force. Suspecting Light of being the killer, L essentially confirms his suspicions after Kira doesn’t kill James despite James going public as the face of the task force. Mia is angered that Light refuses to kill his dad. Soon, many of the members of L’s task force are killed by Kira despite Light not writing their names in the Death Note. Light suspects Ryuk of being behind the killings of the task squad members.

L is enraged at the loss of his assistant and decides to kill Light personally as he lacks enough hard evidence to charge him with Kira’s crimes. James realizes what L is trying to do and orders the police to stop L. Meanwhile, Mia reveals that she is the one who discovered the identities of L’s task force and killed them, stole the page with the assistant’s name so L couldn’t rescind the death sentence, and demands that Light give her ownership of the book. She says that she wrote L’s name in the book and will burn the page if he transfers ownership (that’s why she didn’t want him to waste his one chance to rescind a murder on L’s assistant). He says he will meet her at a ferris wheel to give her the Death Note. A chase between L and Light ensues, but Light gets away

Light meets Mia on the ferris wheel and asks her to agree to abandon the Death Note and run away with him. She refuses and the ferris wheel starts falling apart (ostensibly as it is almost Light’s time to die). The pair fall out of the ferris wheel and Mia ends up falling to her death. As Mia falls, she drops the page containing Light’s name and it drops into a fire (thus cancelling his death).  Meanwhile, Light and the Death Note fall into the nearby ocean. Light is rescued and put into a medically-induced coma.

When Light awakens, he finds the Death Note back in his possession in the hospital room and hides it. He sees on the news that Kira kept killing people while Light was in a coma and thus, Light is cleared of suspicion. L is fired from the task force in disgrace. James visits Light and demands to know if he really is Kira.

Light admits he is Kira and explains that he predicted the events of the night. Assuming she would betray him, Light wrote Mia’s name in the Death Note and controlled her into destroying the page with his name on it before she died. He also wrote several other accused criminal’s names in the Death Note and ordered them to rescue him, rescue the Death Note, write names in it while he was unconscious, and then return the Death Note to him before they died. In so doing, he manipulated his victory. James seems stunned by these revelations.

Meanwhile, L remembers a certain phrase Light used during the chase and breaks into Light’s house. He finds the page of the Death Note with his task force’s names written on it hidden in Light’s room. Realizing the power of the paper, he picks up a pen and considers whether to write Light’s name on the page. As L considers what to do, Ryuk appears to Light and begins laughing about how “interesting” humans are, suggesting that L will not dispatch of Light so easily. 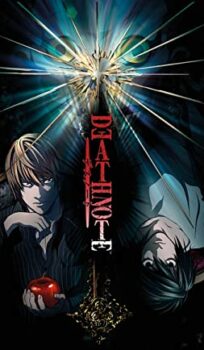