Short Version:
Wyatt Bose is actually Jim Getz. Trying to kill Jonathan, he is instead killed by S. Jonathan and S get together.

Longer Version (and it is complicated):
Jonathan McQuarry (Ewan McGregor) is a meek, lonely accountant who audits big companies. On a whim, a lawyer of his latest audit, Wyatt Bose (Hugh Jackman) talks to him and becomes his friend. On a lunch, they accidentally switch phones and Jonathan finds out about the List; a sex club for powerful people who want intimacy but don’t have time for relationships. Jonathan has sex with numerous women and his confidence grows. However, on one such call he meets a woman only knows as S (Michelle Williams).

Jonathan can’t go through with just having sex with her so they don’t and instead talk, seemingly having a good time. On a second get together, S disappears and Jonathan is knocked out. Police do not know what happened and no one can find Wyatt Bose to verify his claims.

Wyatt shows up and gives Jonathan an ultimatum; either he disperses money from the company’s slush funds to his account or he will kill S. A cat and mouse game ensues; Jonathan learns Wyatt is really Jim Getz, a two bit hustler with a checkered history (it is implied he has murdered several businessmen for their money and the prestige their names bring). In retaliation, Wyatt kills one of the women from The List and plants evidence that makes it look like Jonathan did it.

With no choice, Jonathan transfers the funds and S is supposedly released. He goes back to his apartment and an explosion occurs.

Wyatt goes to Spain with Jonathan’s identity. There we find out that S was in on the plot for a million dollars (she is a former prostitute herself). She however, becomes enraged when she finds out Wyatt killed Jonathan as she started to get close to him.

Wyatt goes to close the accounts, but cannot without the co-signer; him. Leaving he finds Jonathan on the street (with Wyatt’s identity), very much alive. Jonathan tells him he wants half since he did all the work and Wyatt and S tried to have him killed (he figured out the ruse by the hostage picture; the pipe wasn’t leaking then. It was actually the Landlord that had died).

They close the account and get ten million each. Jonathan wants to know where S is and is willing to give Wyatt another five million. Wyatt tries to double cross him, but S shows up and kills him in self defense. Jonathan leaves his share of the money; he never wanted it, he just wanted her. Confronting her, S tells him she’s sorry she wanted to stop the plan and she didn’t know about his attempted assassination. She gets into a cab and leaves, crying.

An undisclosed amount of time later, Jonathan is walking around in Spain when he sees S. She has decided to stay with him and work it out. They walk toward each other as the screen goes black. 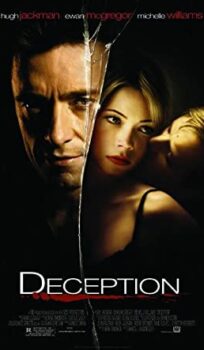