The small portion of the comet -“Biederman”- crashes on the sea, as expected.  It creates a gargantuan tidal wave that is seen sweeping half of continental North America.  Jenny (Téa Leoni) and her father reconcile shortly before the wave sweeps them both.  Leo (Elijah Wood), his wife Sarah (Leelee Sobieski) and Sarah’s baby brother are seen among a large group of people fleeing the rising water by climbing to high lands; Sarah’s parents also die.

Meanwhile, back in outer space, the mission, commanded by Capt. Spurgeon ‘Fish’ Tanner (Robert Duvall) decides that, in order to prevent the large portion of the comet -“Wolf”- to hit Earth, the Messiah ship must run into its core with the remaining nuclear heads active, so the blast can truly destroy it; however, it would become a suicidal mission.  The crew accepts.  Each of them say good-bye to their respective loved ones before taking it into effect.  Eventually, the comet explodes into thousands of shiny bits that harmlessly dissolve into the Earth’s atmosphere, which is contemplated by survivors down below.  The planet is saved from an Extinction Level Event.

In the end, from an almost-totally-demolished Capitol at the ruins of Washington, D.C., President Beck (Morgan Freeman) gives a speech about the massive damages of the first impact, which also included Europe and Africa; and the intentions and hope of rebuilding civilization. 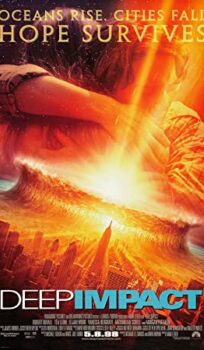