SHORT VERSION:
Despite Kat’s concerns for his safety, Arthur/Defendor decides to face Kristic and his men head-on at the harbor, where Kristic is doing a big weapons and drugs deal. He informs his cop friend Captain Fairbanks about Kristic’s deal and then heads to the harbor, leaving a trail of flares for the police to follow.

Arthur puts up a good fight against Kristic’s men, but when he faces Kristic himself, he gets shot multiple times while Kat watches in horror from afar. Kristic and his men then try to escape, but arriving police cruisers show up and engage them in a gunfight. Meanwhile, Kat tends to the dying Arthur, and he makes her promise to give up drugs and prostitution and get a real job, specifically as a writer, since she had earlier mentioned that she was told that she had the talent for it back in high school. Shortly after telling each other they love each other, Arthur dies. In the days that follow, people across the city praise Arthur and call him a real hero.

Sergeant Dooney – the corrupt cop on Kristic’s payroll – is arrested, convicted of corruption, and sentenced to 26 years in prison. Kristic also gets arrested, and is now jailed in the Hague awaiting trial for numerous crimes. Kat keeps her promises to Arthur and pursues a writing career, and a story she writes on him makes the newspaper.

LONG VERSION:
Arthur/Defendor (Woody Harrelson) ends up getting arrested for beating up Kat’s (Kat Dennings) father while out of his disguise to make him pay for sexually molesting Kat when she was younger. During his trial, his boss and friend Paul (Michael Kelly) – in an effort to get the judge to understand Arthur’s mental handicap – reveals how Arthur engages in vigilantism as Defendor. The judge orders Arthur remanded until he undergoes a full psychological evaluation with Dr. Park (Sandra Oh). After Paul leaves the courtroom, he gets approached by a newspaper reporter who asks him to tell her everything about Arthur, saying that the story she plans to write on him might sway public opinion in his favor. Paul does so, and the subsequent story causes people all over town to show support for Arthur. A teen he had earlier saved spray-paints a mural of him as Defendor on a random wall.

Arthur fills Dr. Park in on everything that has happened to him up to this point, and that he is after “Captain Industry” (whom Kat falsely said was Kristic [A.C. Peterson]) because he gave his mother drugs and they killed her (his grandfather told him when he was a boy that the “captains of industry” [drug dealers] killed her, and he misinterpreted this as the name of an actual person). Dr. Park praises Arthur for his honesty and forthrightness, but upon presenting her information to the judge, he feels Arthur shouldn’t be let back out on the streets, especially since he had earlier unintentionally ruined an undercover police sting operation of Kristic which resulted in a few cops getting killed. Dr. Park begs the judge to find a way to keep Arthur out of prison, so he later tells Arthur that the court has decided that he will live with Paul and his family from now on, but he cannot be Defendor anymore or engage in vigilantism.

Meanwhile, Kat – desperate for another fix – goes up to Sergeant Dooney (Elias Koteas) and asks him to take her back, but he takes her hostage instead for buddying up with Arthur. He lets Kristic know of it, and suggests taking out Arthur now so he doesn’t tell anyone about next week’s shipment of drugs and weapons, but Kristic tells him that it would be wiser to kill Arthur after the shipment comes in. When one of his goons seconds Dooney’s concern, Kristic has another one of them approach Arthur and give him a piece of paper showing a photo of a gagged Kat and the words “Talk and she dies.” Initially, Arthur renders himself mute, but the next day, he decides to play the hero again and runs off to find and save Kat.

That night, Dooney approaches Kat desiring to have sex with her, so she tricks him into removing the handcuffs on her and then secretly gets a hold of his revolver and shoots him in the genitals. As she runs away, she crosses paths with Arthur, and he takes her to his workhouse. He starts putting on his Defendor outfit again and tells Kat that he is going to capture Kristic. Knowing that Arthur is facing insurmountable odds, Kat tries to dissuade him by warning him that Kristic and his men have guns, and then she admits that she lied about Kristic being Captain Industry, but he is undeterred. Accepting his decision, she kisses him and gives him Dooney’s revolver to use.

Arthur visits Captain Fairbanks (Clark Johnson) at the police station and tells him of Kristic’s incoming shipment and how he and likely Dooney will be there, and that he plans to get them with or without his help. Fairbanks tells him to stay put while he gets a snack for him, but as he tells another officer about what he has just heard, Arthur sneaks out. He drives down to the harbor where the shipment is happening, and leaves a trail of flares for the police to follow. Kat soon becomes overcome with concern for Arthur and runs to the harbor.

Arthur makes it to the docks and uses his tricks to disorient Kristic’s men (and hurls the revolver at one of them to knock him out), but when he faces Kristic, he gets shot multiple times while a horrified Kat watches from afar. Kristic and his goons then attempt to escape, but Fairbanks and a bunch of other cops show up and stop them, and both sides start waging an unseen gunfight. Kat goes up to the dying Arthur, and he makes her promise to give up drugs and prostitution and find a real job, specifically as a writer, since she earlier mentioned to him that she was told that she had the talent for it back in high school. They give each other their love, and he dies soon after.

In the days that follow, numerous people – including Paul, as well as Dr. Park and her daughter – pay tribute to Arthur at the spray-painted mural, and most people calling in to a local radio show thank him and call him a real hero. Dooney is arrested, convicted of corruption, and sentenced to 26 years in prison. Kristic is also arrested, and is now behind bars in the Hague awaiting trial for numerous crimes. Kat writes an article about Arthur that gets published in the newspaper, and she is last shown working on another story at her typewriter. 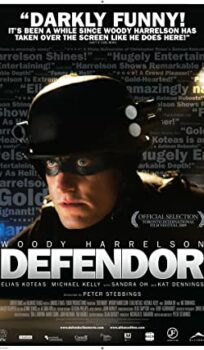