Short Version:
Emily (Elizabeth Banks) is Maya’s (Abigail Breslin) mother. At the end, Maya and Will (Ryan Reynolds) take a taxi to April’s (Isla Fisher) house and she’s angry with him. Over the speaker, April overhears Maya asking Will to tell April the story how they met like he told Maya. Will tells Maya that they’re gonna count to 30, and if she doesn’t let them in, they’ll leave. They get to 30 and start walking away. April runs out of the building and runs to them. Will and April hug. April asks Maya what they should do next. Maya replies “You let us in, and we tell you the story”. Maya, April and Will walk back to the building happily. Maya and April walk inside but Will just stands at the entrance and stares. Then April runs out and jumps into Will’s arms and they kiss.

Long Version:
In 1992, Will (Ryan Reynolds) gets a job in New York, causing him and his college sweet heart (Elizabeth Banks), Emily, to be away from each other for some time. She’s worried that New York’s gonna change him. She asks him to return a package to a woman named Summer (Rachel Weisz) while he’s there. He and his friend (Derek Luke) later open it to discover that its a diary. He friend reads some of it out loud and comes across a portion talking about Summer and Emily touching/kissing. He later gives it to Summer who notices there’s a smudge on a page (knowing he read it). Even though she’s got a 60-year old boyfriend, as Will is leaving she passionately kisses him because she’s “curious”.  At his job, he strikes up a friendship with a copy girl April (Isla Fisher) who he constantly debates with (politics, cigarettes, etc.,). Her boyfriend ditched her on her birthday so he could perform a gig so Will (out of guilt) decides to spend a night out on the town with her. Emily takes a surprise visit to New York and Will and her go on a walk. In the park he gets down on his knee and pulls out a ring. Just as he’s proposing to Emily, she admits that she slept with his roomate. They go their separate ways. He starts dating Summer who later writes an article that makes him lose his job so he leaves her. On his birthday, he admits his love to April. But she didn’t want him to tell her that NOW. She wanted him to tell her that when he had his “sh*t together”. He mocks her how she could do anything yet she making copy papers. She slaps him and leaves. Will then finds a book at a bookstore that April accidentally gave away but held dear. April’s father wrote an inscription to her on the front page and gave her the book on her birthday, but then her dad died 3 weeks later. That’s why it meant so much to her. He buys it but keeps it for a while.

Later he bumps into a pregnant Summer (who Maya (Abigail Breslin) is worried is her mother and Will might not be her father…lol) and she invites Will to a party. At the party, Will confronts Summer and states that he doesn’t want there to be any emotional stuff between them anymore. She agrees. She wants him to meet a friend of hers. They walk to the balcony of the house to see Emily standing there. They go for a walk and stop. She gives him a speech to comfort him and strokes the side of his head. THAT’S IT! Maya knows that Emily is HER mom because she caresses Maya’s head whenever she feels bad. Emily who’s real name is Sarah is just by coincidence walking down the street as Maya figures it out. He finally returns the book to April and admits that he’s had it for a couple of years and she gets angry at him and makes him leave.

Later, Maya figures out that Will changed Sarah’s name to Emily and Natasha’s name to Summer. Yet, he didn’t change April’s name which means he still has feelings for her. They take a cab to April’s house and over the speaker, April overhears Maya asking Will to tell April the story how they met. The way he told Maya. Will tells April that he kept the book because it was all that he had left of her. They come to the conclusion that April won’t let them in so they start walking away. April runs out of the apartment building and runs after them. April and Will hug and April asks Maya what they should do next. Maya says “You let us in, and we tell you the story”. April, Maya and Will walk back to the building. April and Maya walk inside, but Will just stands at the entrance and stares inside. April runs out and jumps into Will’s arms and they kiss. 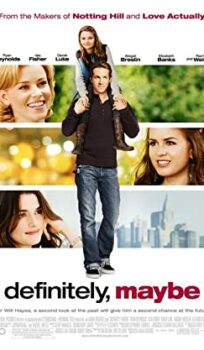