This film is a wonderful example of a 1950’s romantic comedy.

Bunny Watson (Katharine Hepburn) is head of the research department of a large TV network.

Unknown to her, the man wandering her offices with a tape measure is Richard Sumner (Spencer Tracy), a computer designer/efficiency expert who has been hired to modernize her reference operation.  Bunny does some quick research on Sumner and believes the goal of his project is to replace her and the entire research department with computers.

Conflict grows initially as does their romantic interest in one another.  The romance continues to build despite maneuvering by network TV executive Mike Cutler (Gig Young) with whom she has had a 7-year relationship.  After several computer miscues, thanks in part to mild staff undermining, the truth about Sumner’s project is acknowledge.  He explains that the computer was designed to help the research staff and not replace them and that there would be more work than ever.

In the final sequence, Bunny seemingly accepts both the advent of computers and Sumner as a mate. 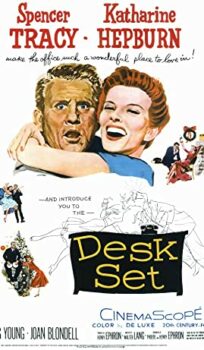