The Blank kidnaps Tess (Glenne Headly) and puts her in the Club Ritz’s attic to frame Big Boy (Al Pacino) for kidnapping, and then he kills D.A. Fletcher (Dick Van Dyke) and makes it look like Dick Tracy (Warren Beatty) blackmailed and murdered him. On New Year’s Eve, Tracy’s police friends spring him from jail, and he heads to Mumbles’ (Dustin Hoffman) home and forces him to admit (in a clear voice) that 88 Keys (Mandy Patinkin) set him up, having been paid by Big Boy to get him out of the way.

Tracy goes to the Ritz and sees Tess in the attic. The Blank telephones Big Boy and tells him that Tess is up there, and when he sees her, and Tracy up above, he knows now that he was framed. He takes Tess, and he has his goons face Tracy and the police in a gunfight in the streets so he could try to escape, but all of the goons die. Big Boy then takes Tess to the city’s drawbridge, and ties her up on a bridge mechanism to kill her. Tracy follows, but just as he gets the better of Big Boy, the Blank appears, and he tries to force Tracy to kill Big Boy so they could rule over his operations. The Kid (Charlie Korsmo) soon tackles the Blank, which gives Big Boy the chance to get his gun and shoot him down. Tracy shoves Big Boy down into the bridge gears to his death, and he saves Tess. Tracy then unmasks the Blank to find Breathless (Madonna) underneath it, and she kisses Tracy before she dies. Outside, Tracy and Tess lovingly embrace.

The next morning, Tracy, Tess, and the Kid are eating at the diner. Tracy tries to propose to Tess, but he gets a call to go check out a bank robbery. Tracy gives her the engagement ring, which she puts on, and he and the Kid take off to the crime scene. 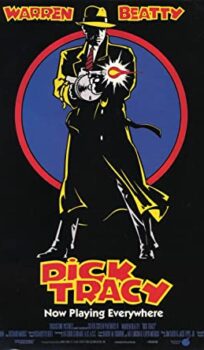