Paul Morgan (Hugh Grant) is trying to win back his 3 month separated wife, Meryl Morgan (Sarah Jessica Parker) after he had sex with someone else on a business trip.  One of his excuses is because Meryl really wants a baby and put pressure on him with fertility clinics, drugs and ovulation sex.  The shoe lies on the other foot when we find out that Meryl slept with someone else while they were separated.

During Paul’s wooing of Meryl they witness a killing of one of Meryl’s potential real estate buyers.  The killer saw them and they saw the killer.  Now the FBI is involved.  Paul and Meryl are put in the witness relocation program under the watchful eye of Marshall Clay Wheeler (Sam Elliott) and his wife, Emma Wheeler (Mary Steenburgen) in a small town called Ray.

They do the small town thing.  They get advice from Emma.  They rekindle their romance by reciting their wedding vows to one another under a star filled sky.

The killer eventually finds them by placing a bug in Meryl’s assistant’s bag and work desk.  He finds their location because Meryl calls her adoption agency from the town doctor’s office to cancel her paperwork since she’s not sure about her future.

The killer shows up at the Wheeler’s house while they are away at the town rodeo.  The Morgan’s (now the Foster’s) get away on a horse into town.  They hide in the clown rodeo’s fake bull costume.  The towns folk not knowing the Foster’s are in protective custody or running from a killer or in the bull costume put them to work.  The Foster’s get blind sided by a bull in the pen.

Seeing Meryl hurt, Paul gathers the courage to face the killer with his bear spray.  Instead of spraying the killer he sprays himself.  Luckily the towns folk come to his rescue.  With a lucky horseshoe toss by Clay the killer is knocked out.

The FBI come and get the killer and bring the Foster’s back to New York.  Three months later, the Morgan’s are coming off a plane with a Chinese baby girl.  They are in a new apartment and Meryl is pregnant. 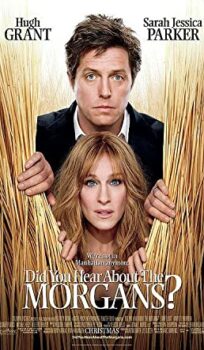