The Dirty Deeds is a list of ten outrageous challenges that must be completed between dusk and dawn on the Friday night of the homecoming weekend. The Deeds are gradually revealed to be as follows:

After Zach (Milo Ventimiglia) completes the seventh Deed with help from Meg (Lacey Chabert) (before which they both showed a mutual attraction to each other), she gives him the keys to her car so he can use it to complete the remaining Deeds, since Lawton’s (Matthew Carey) buddies slashed one of the tires on his car, and she walks back home. When he reaches her car, Lawton surprise attacks him and tosses him the envelope for Deed #8, and then he heralds the arrival of J.D. (Alex Solowitz), the “toughest kid” from Deed #2 who has been aching to get revenge on Zach. J.D. appears with a friend and punches Zach in the gut, but then the homeless man Mullet (Todd Zeile) – having secretly followed Zach from the beginning – comes to Zach’s defense and sends J.D. and his friend running. After checking on Zach, Mullet tells him that he ought to consider bailing on the list.

Zach continues on, however, and completes Deed #8 by going to a posh nightclub and stealing a Ferrari from a clubgoer through posing as a parking valet, but he doesn’t realize that the clubgoer he stole it from is mafia boss Vincent Scarno (Mark Derwin). After Scarno realizes that his car has been jacked, he sees Meg’s less-than-fancy car parked nearby and (somehow) deduces that it was the car Zach came in, so he has a cop on his payroll run the license plate number and gets directed to Meg’s house. When Meg returns home, she finds Scarno playing cards with her brother Kyle (Wes Robinson), and he speaks privately with her and tells her that her “boyfriend” stole his car, and then warns that Kyle will be severely harmed if he doesn’t get it back immediately. Meg takes both him and Kyle to the diner where Zach has been meeting Lawton, his girlfriend Jen (Erin Torpey), and their classmates every time he completes a Deed.

Zach returns to the diner with the Ferrari, and he mocks Lawton over the earlier assault from him and J.D., which tarnishes Jen’s view of Lawton. Lawton tells Zach that he threw the final two Deeds away because he thought he wouldn’t return after pulling this off, but Jen reveals that she picked them back up. As Meg, Kyle, and Scarno make their arrival, Zach finds out what the ninth Deed is, and Lawton gloats over how Zach will fail this since Duncan Rime is believed to no longer exist. Suddenly, Mullet appears and reveals that he is Duncan Rime, and provides his old driver’s license as proof. When Zach asks what happened to him, he replies that it’s a long story, but it started back in his senior year of high school; he was living an enviable life, but he figured that being the first to complete the Dirty Deeds would be the perfect way to cap off his senior year. He says that there were only eight Deeds back then, and the rules say you have to add more to the list if somebody gets through them. However, there was no reason for doing that, or for doing ANY of the Dirty Deeds for that matter, which was something he understood only after he graduated and got out into the real world, upon which he realized how miserable he had been all through high school, playing this stupid game and pretending that he was cool. Before walking away, he warns Zach that, if he keeps playing by their rules (“their” obviously referring to the popular kids), they will always beat him, even when he thinks he’s won. Zach takes the envelope containing the last Deed and tells Lawton that he is a waste of skin and the list is a waste of time, and then he has Kyle rip it up and throw the pieces at Lawton.

Officer Dill (Michael Milhoan) and Officer Bevins (Keith Britton) then shows up to arrest Zach for doing the list, specifically for the eighth Deed, but Scarno tells the officers that, contrary to the report they earlier received, he let Zach borrow his car. The officers end up having to drop the issue and leave, and then Scarno orders all of the teens to go home except for Zach, having spared him from the cops so he could deal with him himself. He assures Meg that nothing will happen to Zach, but she replies that she couldn’t care less because his thievery almost got Kyle killed. Scarno takes Zach to another diner and has a long talk with him that goes into the morning, and they bond over Zach telling him about the list and his reason for doing it.

That same morning, Lawton collects the pieces of the tenth Deed and finds out what it is, and after liking what he reads, he has J.D. meet with him and shows him the Deed. J.D. comes up with a nasty plan to finally get his payback: He will get a bunch of M-80 fireworks and pack them into the stage on the football field at the homecoming carnival, then set them to explode when the carnival starts at 9 a.m. and scare everyone, and Zach will get arrested for it since the cops already know that he was doing the Dirty Deeds. He and Lawton talk about this within earshot of Jen, and she – having now fallen out of love with Lawton – decides to track down Zach and warn him. She finds him while he is still with Scarno and fills him in on everything, and though Zach is initially apathetic about this news, he is motivated to act after she adds that the explosion could badly hurt Meg, since she is the head of the Honor Society and thus will be on the stage. Having only a half-hour to spare, Scarno allows Zach to take his car so he can get to the carnival in time, and then he calls up some of his henchmen for help. As Zach speeds towards the field, Dill and Bevins spot him and pursue him.

Zach makes it in the nick of time and gets Meg and everyone else off the stage, and just as Dill and Bevins show up and apprehend him, the fireworks go off….but from all over J.D.’s truck, which gets burned to a crisp. As Dill turns his attention to it, Bevins – who has secretly never liked Dill – lets Zach go free just to spite him. Zach and Meg then run into Scarno and his men, who reveal that they had snuck all of the fireworks onto the truck, and Scarno loans Zach his car again so he can make a quicker getaway. After getting in the car, Zach asks Meg if she is still mad at him, and she answers with a kiss before they happily drive off. 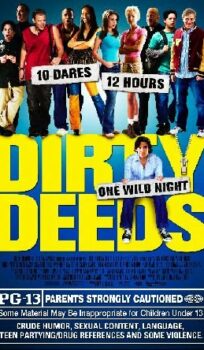