SHORT VERSION:
Jason’s growing relationship with Shadia is ruined when she finds out about his impending marriage to Meredith (though he had personally decided moments earlier to call off the wedding), and the day after, he tells Dick he wants nothing more to do with him for various reasons. Jason returns to Meredith, but at their rehearsal brunch, Dick hijacks the slideshow of their relationship with help from a hacker and shows photos of Jason’s antics in Daytona Beach, and ends it with a photo of Shadia. Jason accepts that Shadia is better suited to him and tells Meredith that they are finished.

Then, with help from Dick and their friend Pam, Jason finds and intercepts the bus taking Shadia to her boat for her year-long trip in the Pacific Ocean (Jason’s father David wound up coming along for the ride as well when he tried to stop Jason from leaving and got tasered unconscious by Pam). Jason first apologizes to her for not disclosing his engagement before telling her that he broke it off and wants to be with her, and when she says she can’t stay, he replies that he will come with her, then kisses her. Before boarding the bus, he says goodbye to Dick and David and takes along a camera Dick earlier purchased for him (Jason had always wanted to be a professional photographer and not a lawyer).

Dick is taken back to his apartment complex by David, and they promise to work on improving their strained relationship. When Dick enters his apartment, he finds Shadia’s friend Lenore – with whom he has a mutual attraction – waiting for him, having tracked him down, and the two of them have sex. A year later, Dick and Lenore are shown to have gotten married and are new parents to a son, and Jason and Shadia are named as the godparents.

LONG VERSION:
While Dick (Robert De Niro) and Jason (Zac Efron) are spending an evening doing karaoke with Shadia (Zoey Deutch), Lenore (Aubrey Plaza), and Bradley (Jeffrey Bowyer-Chapman), Cody (Jake Picking) – a partier that Dick and Jason already made an enemy out of, along with his friend Brah (Michael Hudson) – sneaks a bag of marijuana into Dick’s coat and also takes a look at Dick’s driver license to get information on him. Later on, Dick and Jason share a cigar by the pool at the hotel they are all staying at while the others go up to their room, and Jason tells his grandfather that he has been thinking about calling off his wedding to Meredith (Julianne Hough) since has gotten along better with Shadia than he ever has with her, but wants to tell Shadia the truth about him being a lawyer and not a Time Magazine photographer like Dick led her to believe. Dick tells him to wait until after he has sex with Lenore, fearing that this revelation will nullify his chances to bed her, but Jason won’t comply with this and goes straight to the trio’s room.

They enter to find Cody and Brah already standing in there, and Brah punches Jason. Cody then tells Shadia, Lenore, and Bradley about how he discovered through online research that Dick is not a University of Georgia professor like he also led the others to believe and how Jason is slated to marry Meredith next Saturday. Jason tells Shadia that he has changed his mind about getting hitched after spending time with her, but the heartbroken Shadia thinks he is full of it and tells him to get out. Lenore, however, is not at all upset with what she found out about Dick and still wants to get intimate with him. Officers Finch (Mo Collins) and Reiter (Henry Zebrowski) then burst in to conduct a raid, having been called in by Cody, and since Jason is wearing Dick’s coat, he gets arrested and taken to jail once the officers find the weed.

Dick bails him out in the morning, and Jason gets him to confess that his driver’s license isn’t suspended and he only said that it was to make sure that he would come to Daytona Beach with him. As they walk out of the station, Dick tells Jason that he did everything he did with him in order to get him to think for himself for once, for he has let his father David (Dermot Mulroney) lord over every decision he has made in his adult life. He adds that Meredith is just the latest example of that, and if he marries her, he’ll just be sleepwalking for the rest of his life and be completely unhappy, like David. He also expresses his regret for not being around to raise David the right way, which he feels is what caused him to turn into a materialistic, henpecked country clubber, and he tells Jason that he doesn’t want to see him fall victim to the same fate. Jason replies that that must make him his “last-ditch redemption project”, then says that he has failed as a father and has now failed as a grandfather. Before walking away, he tells Dick that he isn’t invited to his wedding and orders him to stay away from him.

Jason returns to Atlanta and to Meredith, who forgives him for his errors, and they continue to plan their wedding. Shadia makes ready to go on her year-long boat trip out in the Pacific Ocean to study the effects of global climate change. One night, Jason gets a knock at the door, but when he checks it out, he finds no one there except for a box containing a needlepoint canvas of a couple having sex that Dick received from his friend Stinky (Danny Glover) back in Daytona Beach, along with a camera and a note from Dick saying “in case you change your mind”. Jason sends the camera back, however. At the rehearsal brunch the next day, Meredith and Jason sing “Because You Loved Me” by Celine Dion to a slideshow presentation of their relationship, but since Meredith’s back is turned to the screen, she doesn’t see that the slideshow is showing pictures Dick took of Jason’s escapades in Daytona Beach, courtesy of Dick having a guy hack the computer from the underground parkade and putting them in there. The presentation ends with a picture Jason took of Shadia, and after looking at the photo, Jason tells Meredith that he has something to say. Dick then decides to go up to street level and tells the hacker to cut the microphones off, and Jason and Meredith end up having to communicate to each other through Jason’s cousin Nick (Adam Pally) since they’re at opposite ends of the room. Jason tells Nick to tell Meredith that he can’t marry her, so Nick has a waiter give her this news, and Meredith laughs and tells the waiter that he can tell Jason that she had sex with Nick while he was away. Nick hears this and just tells Jason that Meredith understands and he can go on with his life. Jason then heads outside and meets Dick and their drug-dealing friend Pam (Jason Mantzoukas) out there, and Dick says he had to do what he did after Jason returned the camera to him. Jason says that he has to win Shadia back, and Dick informs him that she is on a bus heading west across Florida and her boat leaves in four hours. They then jump into an ice cream truck Pam owns, but David emerges and calls out to Jason. David tells Jason that he can kiss his job at the law firm goodbye if he leaves, but Jason won’t back down, and when he tries to enter the truck and gets into an argument with Pam, Pam tasers him unconscious, forcing them to take him along.

While breaking the speed limit to catch up to Shadia’s bus, they attract the attention of Finch and Reiter, who chase after them. David wakes up in the midst of this, and after asking Dick how he is able to maneuver around the others cars as they go like he is doing, he finally confesses to him – with prodding from Jason – that he was once a Green Beret. They get up alongside the bus, and Jason gets Shadia’s attention and has her ask the driver to pull over, but the driver refuses to do it. Dick responds by driving ahead of the bus and then turning around and coming at it straight on. The bus is forced to stop before they can collide, and Shadia and Jason get out and meet up. Jason tells her that he hasn’t tied the knot, and while it doesn’t make it okay that he lied to her, she must admit that, when they were together, it felt great. He adds that he wants her to stay, and when she says she can’t, he decides to come with her on her trip, then kisses her. When Finch and Reiter move in to arrest Jason, Pam – being friends with them – encourages them to just let the whole thing slide and let everyone go on about their business. Jason tells David that he is leaving with Shadia, and David gives him his blessing. Jason then says goodbye to Dick and gets his camera, then they hug, and Dick last tosses him his Green Beret knife before he gets on the bus.

David and Dick drive back to Atlanta in the ice cream truck since Pam borrowed one of the police cruisers to go back to his store so he could be around to collect a drug shipment. When they stop outside Dick’s apartment complex, Dick tells David that he misses his late wife, but will be okay, and apologizes to him for not being such a great father, but David replies that they will work on it. When Dick enters his home, he discovers that Lenore is there, having tracked him down, and she makes it clear that she still wants to sleep with him. She and Dick then get busy.

As the credits begin to roll, the movie takes us to a scene taking place a year later, where Dick and Lenore are now married and are having their new baby son christened. Jason and Shadia – who are still together – are in attendance and are named as the baby’s godparents. 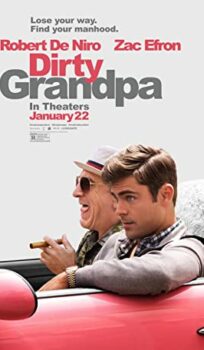