Short Ending:
The eldest daughter knocks out her canine – “dogtooth” – and hides in the father’s car. The family searches for her in vain. The next morning, the father drives her out of their compound and out into the real world. The film ends with a closeup of  the car trunk, unclear as to whether the eldest has escaped, will escape, or has died in the trunk.

Long Ending:
Father (Christos Stergioglou) and Mother (Michele Valley) keep their three adult children (mid-20s) isolated from the outside world in a compound. They have completely brainwashed their children and convinced them that the world outside is apocalyptic and that they will die should they venture outside. The children are taught the only way out of the compound is in their father’s car – and that if they step out onto the road they may be attacked by cats, who Father claims are blood-thirsty creatures.  Father stages elaborate lies to convince his children that he is the only person strong enough to protect them from the outside world. Father has a job outside the complex, but has told his coworkers that his wife is deathly ill and paralyzed so that nobody inquires into his affairs.  During dinner one night, Father states that the kids can leave in his car when their incisor – “dogtooth” – falls out, knowing that the children’s permanent teeth will never fall out.

There are two daughters, eldest (Aggeliki Papoulia) and Younger (Mary Tsouni), and Brother (Hristos Passalis). Eldest is violent and rambunctious, Younger is sexually repressed and infantile, and Brother is emasculated and subservient. Apparently, another child had escaped from the compound and Father and Mother eventually fake his death, saying he has been devoured by a cat for venturing outside (the real fate of this fourth child is never revealed). Because Brother is a young adult, Father pays a security guard at his work named Christina to come to his complex and have passionless/violent sex with Brother. Unbeknownst to the parents, Christina also gives gifts such as headbands and socks to Eldest in return for Eldest performing sexual favors on Christina. Eldest then often has Younger perform sexual favors on her as well.

Eldest is clearly growing unhappy with being confined to the complex, often gazing longingly at the airplanes flying overhead. Eventually, Eldest blackmails Christina into allowing her to borrow popular films “Rocky” and “Jaws” which introduces her to the outside world. However, these films also make Eldest more violent, and eventually Father discovers Eldest’s secret video tapes. In a fit of rage, Father visits Christina at her house, fires her and beats her almost to death with her VCR. Father tells Mother that outsiders may no longer come to the complex. They force Eldest to become Brother’s concubine, although she threatens to kill him if he touches her again after their first round of intercourse. Eldest also discovers Mother’s hidden telephone and is shocked to hear the operator’s voice on the outside line.

Eldest finally becomes completely unmanageable. While the household is asleep, she takes a dumbbell and bashes it against her teeth until her “dogtooth” falls out. Bleeding profusely, she stumbles out to Father’s car and hides in the trunk. The family searches for her in vain, and Father mentions that he will soon bring a guarddog to the complex to assure this will never happen again.

At the end, we see Younger and Brother kissing while in bed together – having apparently learned to show affection for one another rather than engaging in the passionless animal urges they had displayed throughout the film. Father drives to work outside the complex, and runs into his office while his car runs idly. The camera focuses on the trunk before the credits roll, leaving it unclear whether Eldest managed to escape, will try to escape after the credits roll, or has died in the trunk (probably due to the bloodloss or infection from her tooth removal). 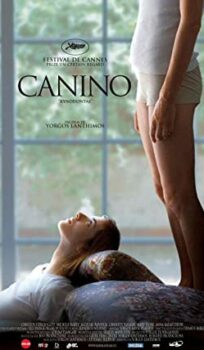