David and Rosemary Bower are driving with David’s daughter Judy. They are lost in the middle of nowhere in a terrible thunderstorm, and the car slides of the road into the mud. They see a large mansion close by, and seek shelter in it. Rosemary is a witch of a stepmother, and she and David are mean to Judy and each other. Soon after, 3 others show up as their car is also stuck in the mud. Ralph is a kind businessman. WIth him are Isabel and Enid, 2 rude, obnoxious punk rockers. The house belongs to an elderly couple who are toy makers. There are dolls everywhere. Ralph is the only adult who is kind to Judy, and polite to the old couple. Due to the violent storm, they well trapped there for the night.

Isabel decides to search the house for jewelry or other valuable they can steal. She is attacked and killed by dolls. Judy witnesses it and runs to David and Rosemary. They are furious she disturbed them and accuse her of lying. She goes to Ralph’s room. He goes with her to show it is safe, but is surprised to discover blood all over the hallway. Ralph frantically wakes David, Rosemary and Enid. Enid sees blood on Ralph (from falling in the hallway) and accuses him of killing Isabel. David accuses Ralph of being a pervert for being with Judy late at night.

Enid searches the house for Isabel. She finds Isabel’s corpse in the attic, and Isabel has been partially turned into a doll. Enid is attacked and killed by the dolls. Judy runs away, and David searches the house for her. While he is gone, dolls attack and kill Rosemary. David returns to find the bloody corpse of Rosemary, and believes that Ralph did it. Judy takes Ralph to show him a surprise, a store room full of toys. Ralph is shocked when she shows him that the dolls are alive and can move and speak. He is horrified and begins to destroy dolls. The dolls are going to kill him, but he is spared when Judy pleads for his life. David enters and he tries to kill Ralph for what happened to Rosemary. The dolls attack David. While David fights them, Ralph and Judy flee.

The old couple enter and confront David. They reveal that through witchcraft, they can turn people into dolls, and do it to those who are so mean and selfish they do not deserve to be human. David is turned into a jester doll. Ralph and Judy collapsed from exhaustion. In the morning, the old couple wake them. The old couple have a note from David that he and Rosemary are leaving without Judy. Supposedly, the note says David left money for Ralph to take Judy back to her mother. As Ralph and Judy drive off, it is hinted that Ralph will marry Judy’s mother and provide Judy a loving home. We see another car get stuck in mud, and a bickering family head to he mansion. 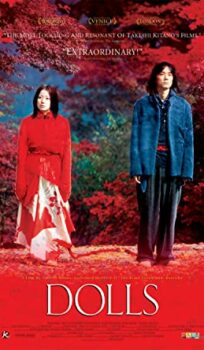