Willie (Keith Coogan) makes it to the final event of the Kamikaze Run against Spider (Lochlyn Munro), the latter having got there through a combination of cheating and hiring a supposed prostitute, Samantha (April Telek), to tire out his opponents with wild night-long sexcapades and make them easy to defeat (something Willie managed to avoid the night before and cause Hans [Lee Reherman] to get seduced instead). Spider attempts to cheat several times during the race, but Willie keeps up with him right up until they get close to the finish line, where Spider tries to knock him off his feet and instead knocks them both down. They lose their skis in the fall, so they make a break for the finish line on foot, and Willie reaches it first, winning the tournament and the $500,000 grand prize, which will be more than enough money to save Jake’s (Tom Heaton) airfield from foreclosure (as well as his own job there). Willie excitedly hugs and kisses his new girlfriend Annie (Staci Keanan).

Samantha shuns Spider and leaves the mountain with Hans, having fallen in mutual love with him, and Hans stands up to his controlling mother (Estelle Harris) before he goes. Soon after, an absent-minded act on Willie’s part starts up a big brawl between the spectators and skiers, mirroring a similar brawl caused by Willie’s absent-mindedness at a local bar at the start of the competition. 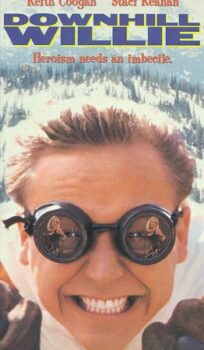